Black "Hebrews" are NOT Hebrew or Jewish

MUSLIMS IN OXFORD RAPED 12-YEAR-OLD WHOM THEY CONSIDERED PROPERTY 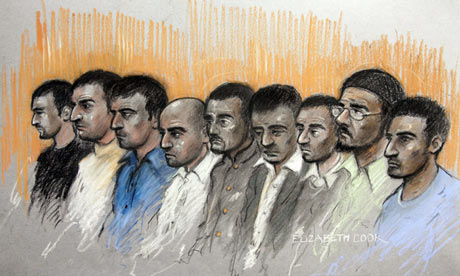 A court artist's sketch of defendants (left to right) Kamar Jamil, Akhtar Dogar, Anjum Dogar, Assad Hussain, Mohammed Karrar, Bassam Karrar, Mohammed Hussain, Zeeshan Ahmed and Bilal Ahmed. Photograph: Elizabeth Cook/PA
A young woman has told the Old Bailey that when she was 12 years old she was branded with the initial of a man so other men who raped her would know she "belonged" to him.
The jury was earlier told that the woman, now 19, had been sold to the man as an 11-year-old. She told the court that until she was 15 he repeatedly and brutally raped her, organising for other men to have sex with her.
The woman, known as girl D for legal reasons, said on several occasions Mohammed Karrar and his brother Bassam Karrar forced her to have sex with one of them while performing a sex act on the other.
The woman is the fourth witness to give evidence at the Old Bailey in the trial of nine men accused of offences including rape, trafficking and child prostitution against children as young as 11 in Oxford.
0 comments
Email ThisBlogThis!Share to TwitterShare to FacebookShare to Pinterest
Newer Posts Older Posts Home
Subscribe to: Posts (Atom)