Flew in by mistake 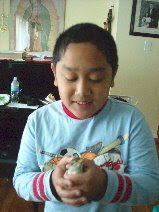 This little bird flew in the house by mistake.  My son picked it up and gently laid it outside to fly.  If only it can be that way with the fetuses that somehow flew in the womb by mistake.  I guess we can still reach out gently to help the mother and save the child.
From here, I can only point out web sites of people who are happy to adopt that "little birdie".
http://adoptionnetwork.com/
2 comments
Email ThisBlogThis!Share to TwitterShare to FacebookShare to Pinterest 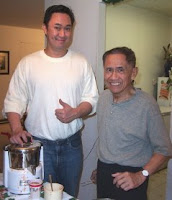 It was what I did when I was in between jobs that seemed to matter most. Back then, I took my late dad for his cataract surgery. We got his new car together and went shopping at CostCo. But that changed when I started working again as I spent 10 hours a day in the office & 2 on the road and then some over the weekends. I stopped visiting him. When he came to visit, I asked what he needed & worked on it quickly. He once asked me if I wanted to browse at Radio Shack, I told him, "Not really." That was the last time he ever asked. From then on, his visits became less until they stopped.
I called him one weekend while I was at work to impress him with my diligence. The next day, he stopped by. I asked him to sleep over. In the morning I fixed him some coffee and he took it as though he was accepting my reparation. As I was about to leave for work and he for his place, he lost his keys and seem bewildered. When my wife found the keys, I asked her to hide them. That night I got my brothers together and had dad brought to the hospital the next day. He died the day after.
I now drive his Corolla that we bought together to remind myself that I did take care of him when I had time. I feel that I could have done more, but it’s too late.
0 comments
Email ThisBlogThis!Share to TwitterShare to FacebookShare to Pinterest
Newer Posts Older Posts Home
Subscribe to: Posts (Atom)