Welcome to DC, 112th Congress.  Here are some tips, from MichelleMalkin and most of us.   My comments in parenthesis

2. Serve the people, not the press.  (The Press are the lapdogs of the Democrats.  So, you won't please them if you oppose their puppeteers.)

3. Neutralize the grievance-mongers: Confront the race card early and often.  (Don't feel guilty and get played that way.  People of color support you - albeit silently.)

4. Neutralize Alinsky’s avenging angels: Counter the human shield strategy early and often.  (Just say, "Save the drama for you momma.")

5. Don’t fall prey to Chicken Little Syndrome again. Don’t.  (Remember what they said about crisis not going to waste.)

7. Obstruction is not a dirty word.  (If they're driving us into a ravine, then step on the brakes and let them sit behind.)

8. Don’t be afraid to say it: Take Your Olive Branch and Shove It, Democrats.  (Shove it where the sun doesn't shine.  Shove it deep.  Shove it hard.  Compromise is treachery.  Compromise is selling out.  If there is no common ground, then so be it.  Better alone than with bad company.)

9. Show, don’t tell: Transparency. Accountability. Integrity. When you fail, you’ll be called out. The “R” after your name doesn’t give you immunity. Ever.  (We'll have "T" people next time. )

10. This is your oath of office. Live it: “I do solemnly swear (or affirm) that I will support and defend the Constitution of the United States against all enemies, foreign and domestic; that I will bear true faith and allegiance to the same; that I take this obligation freely, without any mental reservation or purpose of evasion; and that I will well and faithfully discharge the duties of the office on which I am about to enter: So help me God.”   (Pray often.  Pray for real.  Pray well. Pray hard.) 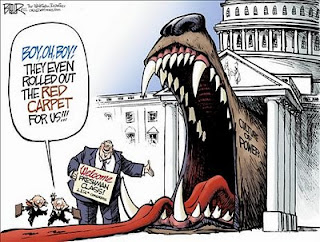 US being overwhelmed by Jihad on legal, cultural, educational, financial and military fronts and the Obama administration continues to deny, hide or obfuscate the real cause i.e. Islam - not extremist Islam but plain Islam.  Their Koran mandates it and Mohammed's example shows the violence intended for non-Muslims.  Allen West has the integrity to be able to fearlessly and honestly point this out.  It appears that the Saudis cannot buy him unlike the others.  I hope and pray that he takes extreme precaution as he is a prime target of the Muslims.  I won't be surprised if there are fatwas against him already.  And if not from the Muslims, then he needs to defend himself from their lapdogs who have infiltrated and subverted powerful offices in the government.  If video fails, go to http://divine-ripples.blogspot.com/2011/01/west-points-to-real-problem-hidden-by.html