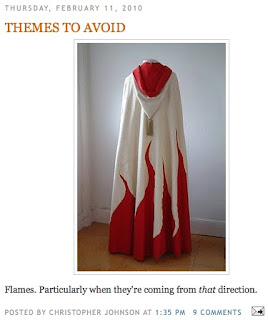 Good flames e.g. tongues of fire during Pentecost come from above.

If this one has already been purchased and there are no returns, then you might do the "3 men in the fiery furnance bit" but that would really be a stretch.

Better resell or donate it to womyn priests.

Sex Guide for kids (10 above) - not disclose HIV status

Here is a guide book from Int'l Planned Parenthood for "A young person's guide to their rights, sexuality and living with HIV"  Source http://www.ippf.org/en/Resources/Guides-toolkits/Healthy+happy+and+hot+text.htm or click here 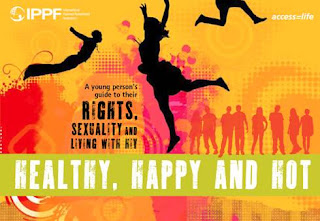 By young person, they mean kids.Highlight the link for Young People and you'll see the definition below.
Young People:  Those who are aged between 10-24 years.

Then there's the money maker - abortion being peddled to kids.
Safe abortion:  Women may have an unplanned pregnancy, even if they and their partner(s) use contraceptives, and may wish to terminate their pregnancy by having a safe abortion.
0 comments
Email ThisBlogThis!Share to TwitterShare to FacebookShare to Pinterest

Contact: Lila Rose, media@liveaction.org, (323) 454-3304
MILWAUKEE, April 12th–A new undercover video reveals medically inaccurate abortion counseling at a tax-funded Milwaukee Planned Parenthood clinic. The video, released by youth-led pro-life group Live Action, records Planned Parenthood staff distorting basic facts of fetal development and pressuring a woman to have an abortion.
In the video, a staffer tells a woman who is reportedly 6 to 8 weeks pregnant that at this stage her baby has “no arms, no legs, no heart no head, no brain.” The staffer emphasizes the difficulties of adoption, urges the woman to obtain an abortion as soon as possible, says that images of abortion are fabricated, and states that the unborn child at 6 to 8 weeks has no “identifiable parts” and is just “fetal matter.”