In memory of 9/11 victims - my personal tribute 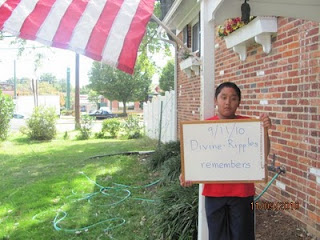 I've put up the flag again today to honor the victims of 9/11.
0 comments
Email ThisBlogThis!Share to TwitterShare to FacebookShare to Pinterest

Video: W's bullhorn speech at Ground Zero. He hears us & understands unlike BO.

If video fails go to http://divine-ripples.blogspot.com/2010/09/video-buds-horses-respect-ground-zero.html
Obama talks about the academic right to build the mosque of triumph over the gravesite of 3000 victims of Islamic terrorism.  He then makes comments that it may not be the right thing to do.  I guess he's implying that his hands are tied by the Constituiton - that imperfect document that he disregards when it serves his purpose.  Is he the president or is he not.

Back in the 70's, the entire 42nd street was filled with smut shops.  They had the right to be there, but it is not right.  So the politicians wrote laws that caused them to disappear.  Where there's a will, there's a way.  Obama does not want to block the trophy mosque plain and simple.  If he did, he could apply the same pressure that he used on the Florida pastor who planned to burn Q'urans today.