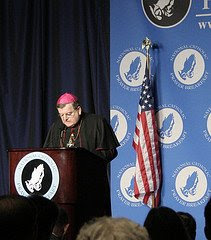 I took this post down before because I thought I was being too hard on some clerics. But after the entire student body chanted in support of Obama at Notre Dame, I decided to take off the gloves. These clerics, Jenkins & Wuerl, are the cause of the confusion and even corruption of the Catholic convictions when it comes to choice and abortion. So, here's that post again and more to come.

----------
During the commencement exercise at a military academy, the nation's president gave the address. At the middle of the speech, he stopped. He looked at the cadets then picked up a poster board and turned it around. It read, "Reform the Armed Forces." He showed it slowly to everyone without saying a word. There was stillness as the meaning sank in. It was genius. He conveyed an uncomfortable reality about the generals whom he relied on, without insulting them. This was never reported in the news, so it saved everyones faces and kept the peace while starting a reform movement. As the young officers entered the force, they had a mission to restore the dignity and integrity of serving the nation and to shed the current culture of corruption.
When the Observatore Romano acknowledged the achievements of the American president, it was standard operational procedures. It saw the facts and noted them as a stateman would. ( Of course the fans became giddy and saw to it a lot more i.e. like an endorsement of the abortion policies.) A few days later, the Vatican sends its 'Chief Justice' Arch. Burke who presented unequivocally the official position about the Catholic Church in America vis-a-vis the issues around her. It is clear and distinct. No one can spin or frame it any other way. And those who refuse to align themselves are identified by their positions.
In a way, it is like the president showing the poster board "Reform the Church in America". The Vatican cannot come in the US to slap wrists everytime someone falls out of line e.g. Fr. Jenkin's and his honoring of Pres. Obama (contrary to the USCCB directives) or Archbishop Wuerl and his willingness to give Holy Communion to public supporters of abortion (contrary to Canon Law). It is up to the laity to discipline these miscreants by dialogue and sanctions e.g.withdrawal of financial support and volunteered services. Here's Abp. Burke's message http://zohoviewer.com/docs/vdrxc

And where Peter is, there the Church is (and definitely not in the archdiocese of Washington, D.C.).
0 comments
Email ThisBlogThis!Share to TwitterShare to FacebookShare to Pinterest
Newer Posts Older Posts Home
Subscribe to: Posts (Atom)