Need to act now more than ever

We need to act now otherwise there will be more abortions. Let us save the soul of our nation and defend our unborn siblings.

http://www.youtube.com/watch?v=_RD7hJhwy5g
0 comments
Email ThisBlogThis!Share to TwitterShare to FacebookShare to Pinterest 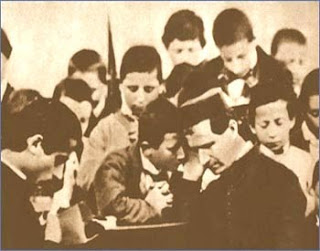 My novice master mentioned that the one pushing for the canonization of St. John Bosco resented the fact that St. John Bosco performed too many miracles. I forgot why. Was it supposed to be done for special occasions only - for big stuff like cancer? I know that if I have a gift to heal, I would quit my job and just heal all day long. I think everyone I know will do the same. So, I don’t get it. If you want to read about St. John Bosco, you can go to Salesiana Publishers on the web. He died at 1888, so there are actual photos of him. He was also ordered by the pope to write his memoirs. The accounts about his encounters with the devil is not far from what is shown in the movies – except that they’re real.
(Picture: St. John Bosco (1888) hearing confessions.)

I don’t have any miracles to report, only “coincidences” that I’ve blogged about earlier. My model, Bo, has a lot more and he has published them at http://bosanchez.ph/category/blogs/ It appears that miracles happened because he followed God’s leadings - no matter how impractical e.g. he felt that God wanted him to buy this woman a ticket. He was ready to do it at the cost of being stranded in Israel. And the stories go on.

In the video, Bo talks about just that – inviting everyone to stop being indifferent and to dedicate oneself to service.

(Video: Bo Sanchez on a talk about overcoming indifference.)

I have friends like Ed Tiong who organizes a Filipino Ministry in VA and Ed Deausen leads a prayer group of couples and calls every one once a week to encourage them in the faith. Then there are my former companions in the Salesian Congregation who dedicated themselves with vows to educate and evangelize the young. I think they’re making miracles too – not just as awe-inspiring. For me, I am down to driving my kids to Catechism and bringing them to Mass on Sundays and confessions every now and then. I lead the prayers and teach them the ways of God. But between that and putting bread on the table, I have a few hours keeping in touch with friends over the internet. Somehow, I feel that to be acceptable too.

I remember on the last day of my Novitiate, my novice master suggested that we make 3 resolutions. I made 2 and asked him to suggest a third. He said, “Be extra-ordinarily ordinary.” It does not mean to be mediocre or so-so; rather, it means to do ordinary things with extraordinary love. I guess that’s the “little way” of St. Therese of the Child Jesus; it’s not as awesome and earth shaking as St. Francis or St. Peter.

So if the extra-ordinary became ordinary for St. John Bosco, we can make the ordinary extra-ordinary.
0 comments
Email ThisBlogThis!Share to TwitterShare to FacebookShare to Pinterest
Newer Posts Older Posts Home
Subscribe to: Posts (Atom)