US gives foreign aid to almost every nation

We give billions in foreign aid almost every nation - including those that hate us.  (Please see earlier post about idiocy of Obama foreign policy.)  Kindly contact your representative to have him support a measure that will refine this process and put some rhyme and reason to giving out our borrowed money.
If video fails, click here or go to http://divine-ripples.blogspot.com/2011/04/billions-in-foreign-aid-to-nations-that.html

If video fails, click here or go to http://divine-ripples.blogspot.com/2011/04/harvards-ferguson-on-us-idiotic-foreign.html

My comment:  You can't fix stupid but you can vote it out.  Now is the time for Michelle to be ashamed of being an American.  I know I am - for what Obama has done, is doing and will do.
0 comments
Email ThisBlogThis!Share to TwitterShare to FacebookShare to Pinterest 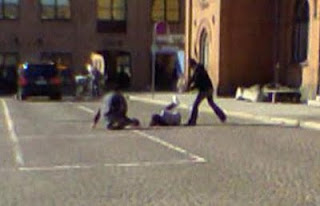 The killing of Ghazala Khan in Denmark by her brother may be the only instance where an 'honour' killing has been photographed while being perpetrated. This picture was captured on cell phone camera and shows the woman's brother aiming the gun at his sister, lying on the ground. Her fiancee, also seen, was wounded, but survived. The killing was planned by her entire family, and Pakistani taxi drivers were used as spies to spot her and alert her family.


More here or go to http://www.typepad.com/services/trackback/6a00d8341c60bf53ef0112793a68f528a4
0 comments
Email ThisBlogThis!Share to TwitterShare to FacebookShare to Pinterest


My comments:  Gaza is Israeli land.  They should just expel the squatters and raze the place for the security of their people, our people.
0 comments
Email ThisBlogThis!Share to TwitterShare to FacebookShare to Pinterest

The Truth About Israel. Refuting the Palestinian Wall of Lies.

If video fails, click here or go to http://divine-ripples.blogspot.com/2011/04/truth-about-israel-refuting-palestinian.html


Please distribute widely so the world will know.  We need to counter propaganda of the Arab sponsored media.
0 comments
Email ThisBlogThis!Share to TwitterShare to FacebookShare to Pinterest
Newer Posts Older Posts Home
Subscribe to: Posts (Atom)