Unsure of what serious Muslims are like? Then do this from the safety of your home...

You can join a Facebook group page then chime in the discussions with your Christian or Jewish views.

Or you can go to an online chatroom and voice your opinions there.

I won't tell you how my experiences were to not bias your expectations.

This will help you go beyond the articles and video clips and actually interact with Muslims yourself.

At least, you'll be safe in the privacy of your home.
0 comments
Email ThisBlogThis!Share to TwitterShare to FacebookShare to Pinterest

Video: Hypocrisy of Arab States on "Defamation of Religion" Exposed 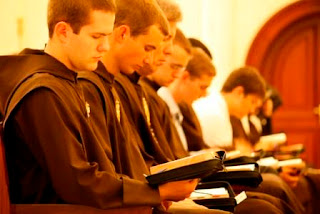 A Jesuit, Franciscan and Salesian was praying Vespers when the power went out.  The Franciscan closed his breviary knowing the he’s dispensed; they’re the touchy feely types. The Jesuit continued praying from memory without missing a beat; they’re the intellectual badasses. The Salesian went to the utility closet to change the fuse – ‘nuf said.
Within the Catholic religious life, there are obviously different ways of following Jesus. While all take the vows of poverty, chastity and obedience, each order has a different mission and way of doing things - like a spiritual cafeteria.  But regardless, all these guys follow all of the Catholic faith with an additional consecration to religious life. While they emphasize certain aspects, they reject none of it, unlike a cafeteria Catholic who picks and chooses truths and practices. While cafeteria Catholics claim to have a relationship with God, that relationship is dubious; if one knows God as Father, then one would have the Church as Mother. But cafeteria Catholics reject things about their mother so, they may not know their Father at all.
0 comments
Email ThisBlogThis!Share to TwitterShare to FacebookShare to Pinterest
Newer Posts Older Posts Home
Subscribe to: Posts (Atom)