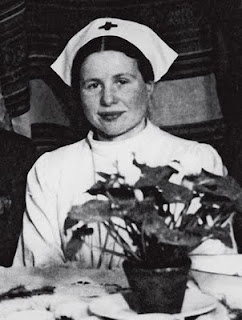 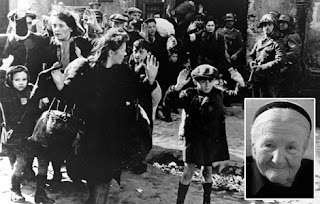 This is Irena Sendler (photo). A short while ago the 98-year-old lady died. During the Second World War, Irena obtained a work permit as a sewage plumber in the Warsaw ghetto. She had an “ulterior motive.” Being German, Irena understood what the Nazis intended to do with the Jews and she smuggled children away from the ghetto in her tool case and burlap sacks. She also had a dog that she brought along that would bark when the inspectors crossed over the border into the ghetto. The soldiers didn’t want anything to do with the dog and the burlap sacks it guarded and let the woman pass through. Moreover, the barking by the dog drowned out any noises the children might have made. Altogether, she is to have saved 250 children’s lives. When she was caught, the solders broke her arms and legs and beat her up.
Irena saved the names of the children in a storage jar that she had buried under a tree in her back yard. After the war she attempted to locate the parents and bring the families back together. Most of the family members, however, had been put to death in the gas chambers. Irena helped her children to find foster or adoptive parents.
Irena was nominated in 2007 for the Nobel Peace Prize but didn’t receive it. Instead, Al Gore was chosen that year for a slide presentation about global warming.
1 comments
Email ThisBlogThis!Share to TwitterShare to FacebookShare to Pinterest

If you had been the only one, he still would have died for you.  He is your personal Savior.

If video fails, click here or go to http://divine-ripples.blogspot.com/2011/04/if-you-had-been-only-one-video.html


"For God so loved the world that he gave his one and only Son, that whoever believes in him shall not perish but have eternal life."  John 3:16
1 comments
Email ThisBlogThis!Share to TwitterShare to FacebookShare to Pinterest

If you're in DC, there's an 8 pm commemoration of the Lord's Burial
If video fails, click here or go to http://divine-ripples.blogspot.com/2011/04/good-friday-commemoration.html