My pastor talked about being about to do only so much in Maryland as though to concede to the Liberal majority. At first it discouraged and angered me that I thought of moving to VA sometime because I cannot stomach the filth and decadence of Liberalism. But then I thought why the defeatist attitude? The demographics though heavily black does not mean an automatic endorsement of the Democrats. From what I have been hearing and seeing, black folks - the decent hardworking ones are disgusted by Obama's immoral ways and policies. They may find it hard to vote for the white man but they will sit this one out. I did not succumb to defeatism and voted for Romney - last week. Hopefully, Tues. will prove my pastor wrong and show that even states dominated by minorities can do the right thing. The free loaders and scum that Obama appeals to are hopefully not that many. Even union members have consciences and vote against their orders. At this time, I take time to pray for our country and the defeat of Obama. I have a feeling that God will hear our prayers and send these depraved people away. Hopefully they repent before they burn in hell like Ted Kennedy.
0 comments
Email ThisBlogThis!Share to TwitterShare to FacebookShare to Pinterest

Colorado bishop: Biden should not receive Communion in my diocese

BY PATRICK B. CRAINE
COLORADO SPRINGS, Oct. 16, 2012 (LifeSiteNews.com) - The Bishop of Colorado Springs is making headlines after he insisted that Vice President Joe Biden, a pro-abortion Catholic, “should know” he shouldn’t receive Communion if a campaign stop brings him to his diocese.
“He should know, and I would do everything I could do to make sure that he knows, he ought not to be receiving Communion,” Bishop Michael Sheridan told the Colorado Springs Gazette earlier this month...

The nation's Catholic bishops on Friday said Vice President Joseph R. Biden misled the country when he claimed Catholic hospitals won't have to pay for contraception nor refer women to other places to get it.In Thursday night's debate, Mr. Biden, a Catholic, said he accepts his church's teaching opposing abortion but added it's not his place to impose it on others. He also said the new health car
e law won't push religiously affiliated institutions to offer coverage they disagree with.
"No religious institution – Catholic or otherwise, including Catholic social services, Georgetown hospital, Mercy hospital, any hospital – none has to either refer contraception, none has to pay for contraception, none has to be a vehicle to get contraception in any insurance policy they provide. That is a fact," Mr. Biden said.
But the U.S. Conference of Catholic Bishops on Friday that was not, in fact, true.
1 comments
Email ThisBlogThis!Share to TwitterShare to FacebookShare to Pinterest 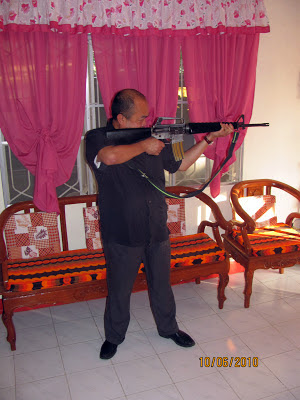 It will scare my children and ruin the drapes.
0 comments
Email ThisBlogThis!Share to TwitterShare to FacebookShare to Pinterest
Newer Posts Older Posts Home
Subscribe to: Posts (Atom)