Quran burned for 9 Copts murdered by Muslims in Mokattamm Egypt on March 8, 2011

If video fails, click here or go to http://www.persecution.org/outofegypt/2011/06/24/churched-burned-protestors-attacked-in-cairo/ 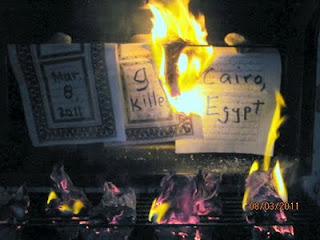 ...Days later, the protests against the burning of the church persisted, this time in the working-class district of Mokattam. Christians again demanded an end to what they describe as “discrimination and inaction by the State”.
On March 8, fighting broke out in Manshier Nasr, a garbage district of Mokattam, as both Christians and Muslims began throwing rocks at each other. Witnesses said the military, which came to disperse the protestors, fired shots into the air and then opened fire on the crowds of people. Once the conflict finally ended in the early morning hours of March 9, at least nine Coptic Christians had been killed and more than a hundred others from both sides were injured.
“We were at one side and the Muslim on the other, we have hundreds of injured at the Coptic side,” an eyewitness told Assyrian International News Agency. “The Muslims were shooting from behind the army tanks.”

My comment: 9 pages of their Quran burned as a protest.
1 comments
Email ThisBlogThis!Share to TwitterShare to FacebookShare to Pinterest

If video fails, click here or go to http://divine-ripples.blogspot.com/2011/07/pope-warns-against-marrying-muslims.html

Couragious and confrontative german newsreport on the muslim abuse of women.
My comment:  It is like marrying a devil worshiper.
1 comments
Email ThisBlogThis!Share to TwitterShare to FacebookShare to Pinterest

If video fails, click here or go to  http://divine-ripples.blogspot.com/2011/07/satanism-in-islam-exposed-videos.html

If video fails, click here or go to  http://divine-ripples.blogspot.com/2011/07/gag-order-cannot-expose-mohammed-video.html

My comments:  We're not allowed to expose that Mohammed married an 8 year old, is a murderer, extortionist, polygamist, robber and someone who made up a cult using the existing religions at the time. Typical attitude from deceivers. Know that the truth sets people free. But they want to enslave not liberate.
0 comments
Email ThisBlogThis!Share to TwitterShare to FacebookShare to Pinterest
Newer Posts Older Posts Home
Subscribe to: Posts (Atom)