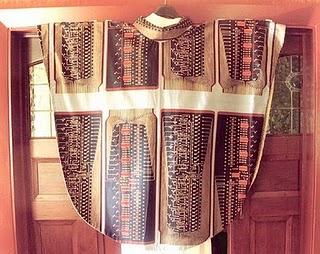 
(1) Ladies and gentlemen, give it up for the only chasuble with its own IP address.
(2) You don't put this on this garment, you hack into it.
(3) Most vestments get cleaned.  This one gets a new hard drive.
(4) Old concept: liturgical colors.  New concept: PC versus Mac.
(5) For the time being, don't run Windows 7 while wearing this or the liturgy will constantly freeze up and you'll have to reboot and start over from the beginning.  Microsoft's working on the patch.
(6) This chasuble also serves as a wi/fi hotspot.
(7) If you want to order one, the name of this product is iGarbage.
1 comments
Email ThisBlogThis!Share to TwitterShare to FacebookShare to Pinterest

When the Left Had Found Religion, the Pope Had To Step In

Che as Jesus - the Liberator. 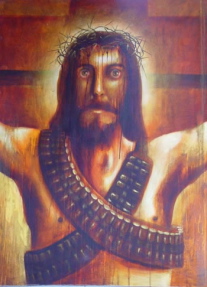 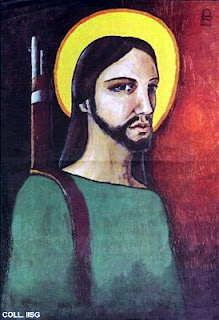 This can go both ways I think - with the NRA. 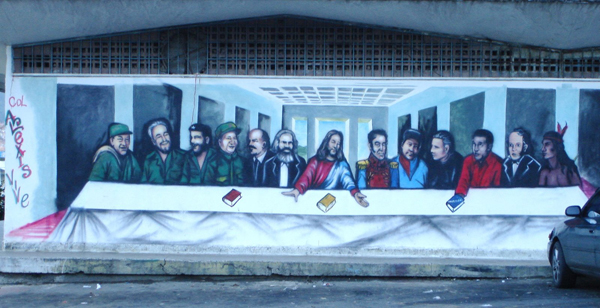 I don't think Reagan is there. 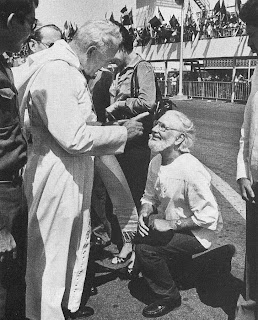 Pope said, "EPIC FAIL!" (either that or "Pull my finger.") Blessed Pope John Paul II on his 1983 arrival in Managua reprimanded Liberation Theology Jesuit priest and Sandinista Minister of Culture Ernesto Cardenal.  Seriously, before the finger wagging, the pope pulled his hand away when Ernesto tried to kiss it.  (And imho, I think the Pope was just restraining himself big time from making a big fist and punching the face in of this pinko commie.  That's what I would have done.)
Source
0 comments
Email ThisBlogThis!Share to TwitterShare to FacebookShare to Pinterest

Celebrating 3 Kings (Epiphany) with shoes left in the window

On Jan. 6th, the feast of the visit of the wise men to the baby Jesus marks the end of the Christmas season.  The video below shows how this is celebrated around the world.  In our home, my children put their shoes in the window the night before.  This morning, they found cash inside.  Originally, one puts straw or carrots inside the shoes for the animals used by the kings to get a present.

Whether the visit was historical or theological, the gifts given are rich in imagery, symbolism and meaning.  Gold for the King of kings.  Incense for the Priest of priests.  Myrrh for the Sacrifice of sacrifices.
If video fails, go to http://divine-ripples.blogspot.com/2011/01/celebrating-3-kings-epiphany-shoes-in.html

See how convinced they are of the righteousness of their crimes against humanity. They justify their monstrous deeds with a sense of victimhood and an injunction from their fabricated deity. If video fails, go to http://divine-ripples.blogspot.com/2011/01/muslim-doctrine-to-non-muslims-join-pay.html

Islamic teachings as defined in their doctrine.

Qur'an (9:29) - "Fight those who believe not in Allah nor the Last Day, nor hold that forbidden which hath been forbidden by Allah and His Messenger, nor acknowledge the religion of Truth, (even if they are) of the People of the Book (the Jews and the Christians), until they pay the Jizya with willing submission, and feel themselves subdued."

From the Hadith:
Muslim (19:4294) - There are many places in the hadith where Muhammad tells his followers to demand the jizya of non-believers. Here he lays down the rule that it is to be extorted by force: "If they refuse to accept Islam, demand from them the Jizya. If they agree to pay, accept it from them and hold off your hands. If they refuse to pay the tax, seek Allah's help and fight them"
0 comments
Email ThisBlogThis!Share to TwitterShare to FacebookShare to Pinterest
Newer Posts Older Posts Home
Subscribe to: Posts (Atom)