The Lord shepherds His flock in the digital information age 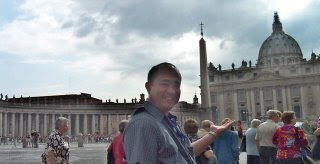 A bill has been introduced in Connecticut that will transfer the decision-making power in financial matters from the clergy to the laity. Although the bill has been pulled out of the process, it raises the question, about the morality of making your bishop “an offer he can't refuse”? My opinion is it depends on the offer. If I threatened the Pope that I'd start my national church unless he recognizes my divorce; then, that is immoral. But if I warned the archbishop of Washington, D.C. that I would report him to Rome if he does not publicly forbid pro-abortion politicians from receiving communion, then, that is moral. Just think about it. The politician goes around telling everyone, “I support abortion and yet I can receive Holy Communion anytime" So, the good archbishop must control that scandal and confusion. So, it goes beyond moral; it is a moral imperative. After the epidemic of priestly pedophilia and embezzlements and episcopal cover-ups, the sheep have been awakened to their co-responsibilities in ecclesiastical affairs. It is exhausting because the clergy was suppose to lead, teach, counsel, guide and sanctify the faithful. Now, they can still sanctify because of “ex opere operato” meaning grace still flows through them regardless of their moral condition. But the rest is dubious as their moral capital is spent.
So, to whom shall we go? First to Lord in meditation, study and service.
Then to the internet. I see and hear my pastor, the bishop of Rome, in Youtube. That is where, I get all the teachings and guidance in its unadulterated form.

Then, there are blogs and websites of faith communities world wide where the witness of faithful bishops, priests, religious and lay folks can edify me - just like this one "Catholic Dads". I can even have fellowship with fellow believers from coast to coast and to the ends of the world. The Lord has a way of shepherding His flock always. He went high-tech this time and that is way cool.