For details, click here or go to source at  http://blogs.reuters.com/faithworld/2011/07/01/ethiopia-jails-hundreds-in-muslim-attacks-on-christians-over-koran-rumour/


An Ethiopian court has sentenced 558 people to jail terms ranging from six months to 25 years for attacks on Christians that displaced thousands and led 69 churches to be burned to the ground. More than 4,000 members of local Protestant denominations were forced to flee near the town of Asendabo, some 300 kilometres (186 miles) west of the capital, in March during a rare bout of religious violence.
Mobs of Muslim youths carried out week-long attacks on Protestants after rumours that desecrated pages from the Koran had been found at a church construction site. Authorities reported a single death from the attacks. 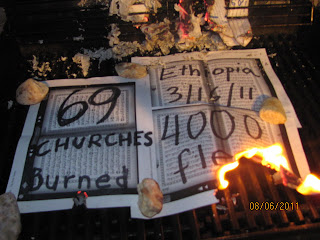