Last year, the bishops threatened to close Catholic hospitals if FOCA was ever legislated. Now with Obamacare, they may have to push through with the threat unless that law gets repealed or amended to allow conscientious objections. Then again, even without Obamacare the Catholic hospitals will still be in a dilemma of choosing between sin or jail as shown in the case of Sister McBride. See Wiki page below for details. Her situation is not a case of double effect but an abortion. Since the fetus is a person with rights, the Church condemns its murder even to save the mother.
US Law however sees it differently. If the hospital did not abort and the mother died, then the hospital could be liable for not providing a reasonable "standard of care". So, the hospital either sins or risks fines and jail time.
So, even without abortion on demand from Obamacare, the Church faces this issue now albeit rarely. The nun chose to allow the abortion thus incurring an automatic excommunication as provisioned in canon law. Had she chosen otherwise, then the hospital might have been sued and forced to shut down. Probably, the nun selected what she thought was the lesser evil. Although I beg to differ because, what is worse than offending God with sin? 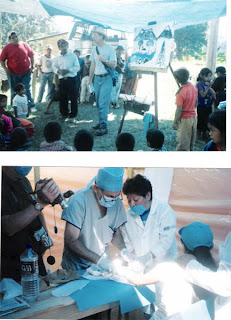 While medical ministry is still valid, cases like this offend God or waste the resources of the faith community. So, in my opinion, unless the laws here change then it is best to continue this ministry elsewhere. Perhaps, it is a call to relocate these facilities and professionals in areas whose people are not covered by Obamacare.
References:
http://www.spiritual-politics.org/2010/05/the_excommunication_of_sister_margaret.html - The justice in not aborting a non-viable fetus and letting the mother of three die is incomprehensible.

http://catholickey.blogspot.com/2010/05/when-is-catholic-hospital-not-catholic.html?utm_source=feedburner&utm_medium=feed&utm_campaign=Feed%3A+TheCatholicKeyBlog+%28The+Catholic+Key+Blog%29
2 comments
Email ThisBlogThis!Share to TwitterShare to FacebookShare to Pinterest

A new twist on an old inspirational "Footprints in the Sand" 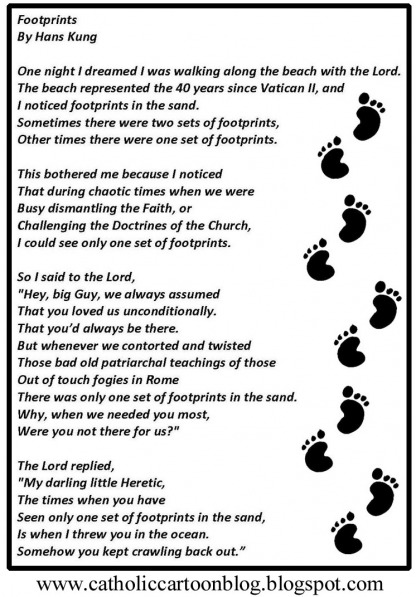