No official Church verdict on this yet.  I mean - you can't make this up.
If video fails, go to http://divine-ripples.blogspot.com/2010/09/video-documentary-of-medjugorje.html 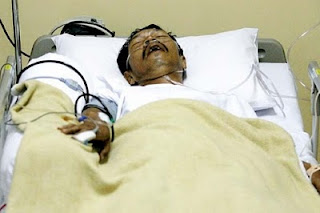 "President Yudhoyono joins (late) his voice to those who condemned Sunday’s stabbing of Protestant pastor Afian Sihombing. Muslim organisations call for the arrest of fundamentalists who stain the soul of the nation.

This decision probably comes in response to criticism from civil society groups who highlighted how he was slow in reacting to the anti-Christian attack, compared to his government’s speedy and tough response to Rev Terry Jones’ plan to burn the Qur‘an.  Online many people voiced similar criticism. “Your move to react over the Qur’an burning issue was highly appreciated, but why don’t you show the same reaction over violence against the Ahmadis and the HBKP?” Burhanuddin Muhtadi wrote."

Meanwhile, no word has come from White House to condemn the assaults on Christians around the world.  Instead, US media keeps talking about bigotry against Muslims.
0 comments
Email ThisBlogThis!Share to TwitterShare to FacebookShare to Pinterest

I voted in my first primary today for an underdog named Brian Murphy.  He's pro-life.  Even if it is just a primary, it has become important because some Republicans are selling out the unborn by supporting abortion.  The meme is focus on the economy and have a "truce" on abortion issues.  Truce and abortion nuetrality are ways to say they won't fight abortion laws.  I suspect Planned Parenthood, the largest abortion provider in the US, bought these poor souls to be able to continue their business.  With Obamacare in place, there's a lot of money to be made or lost specially with the school girls and tax funded abortions.

I've done my part and my wife is voting tonight.  The polls are open until 8.
1 comments
Email ThisBlogThis!Share to TwitterShare to FacebookShare to Pinterest
Newer Posts Older Posts Home
Subscribe to: Posts (Atom)