1:01 PM, Jun 13, 2013• By JOHN MCCORMACK
At a Thursday press conference, House Democratic leader Nancy Pelosi condemned a bill that would prohibit abortions during the final four months of pregnancy with exceptions for when the life or physical health of the mother was at stake.
Asked what the moral difference is between what Dr. Kermit Gosnell did to babies born alive and aborting those same infants moments before birth, Pelosi refused to answer.
“As a practicing and respectful Catholic, this is sacred ground to me when we talk about this,” Pelosi said. “This shouldn’t have anything to do with politics.”
At one point Pelosi falsely claimed the bill that passed out of committee on Wednesday would ban all abortions, when in fact it’s simply a prohibition on abortion during the final four months of pregnancy, with exceptions for the life and physical health of the mother.

More at  http://www.weeklystandard.com/blogs/pelosi-late-term-abortions-sacred_735188.html
0 comments
Email ThisBlogThis!Share to TwitterShare to FacebookShare to Pinterest

Homeland Insecurity: The White House assures that tracking our every phone call and keystroke is to stop terrorists, and yet it won't snoop in mosques, where the terrorists are.
That's right, the government's sweeping surveillance of our most private communications excludes the jihad factories where homegrown terrorists are radicalized.
Since October 2011, mosques have been off-limits to FBI agents. No more surveillance or undercover string operations without high-level approval from a special oversight body at the Justice Department dubbed the Sensitive Operations Review Committee.
Who makes up this body, and how do they decide requests? Nobody knows; the names of the chairman, members and staff are kept secret.
We do know the panel was set up under pressure from Islamist groups who complained about FBI stings at mosques. Just months before the panel's formation, the Council on American-Islamic Relations teamed up with the ACLU to sue the FBI for allegedly violating the civil rights of Muslims in Los Angeles by hiring an undercover agent to infiltrate and monitor mosques there.
Before mosques were excluded from the otherwise wide domestic spy net the administration has cast, the FBI launched dozens of successful sting operations against homegrown jihadists — inside mosques — and disrupted dozens of plots against the homeland.
If only they were allowed to continue, perhaps the many victims of the Boston Marathon bombings would not have lost their lives and limbs. The FBI never canvassed Boston mosques until four days after the April 15 attacks, and it did not check out the radical Boston mosque where the Muslim bombers worshipped.

excerpt:
This isn’t about foreign policy. It’s not about French troops in Mali or Bali or anywhere else. This is about imposing Islamic values through violence. That’s the source of all Muslim violence, whether it’s terrorism or acid attacks or rapes. It’s about imposing Islam on non-Muslims.

The Limits of Tolerance: A commentary by Fr. Barron on Diversity and Inclusion or the lack thereof

The barron can't help but keep cracking up at the mind boggling confusion over this topic by the head of the Episcopal Church in the USA as she misinterprets the situation of St. Paul at Philippi.
0 comments
Email ThisBlogThis!Share to TwitterShare to FacebookShare to Pinterest

A challenge to honest Liberals: define what is human.

http://www.liveaction.org/inhuman/
0 comments
Email ThisBlogThis!Share to TwitterShare to FacebookShare to Pinterest 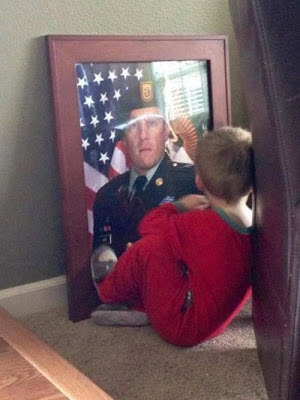 Redditor The MacMan posted this picture of the son of U.S. Army Special Forces Medic Benjamin Wise spending some time with his dad, as caught by his mom. The boy's father was killed in Afghanistan on January 15th.
A bit on SFC Benjamin Wise from NBC News:


Sgt. 1st Class Benjamin Wise, 34, of Little Rock, was on his fourth deployment overseas when he was injured during an insurgent attack on his unit last week. He died from his wounds Sunday at a hospital in Germany, the Department of Defense said in a statement Tuesday.
His brother, 35-year-old Jeremy Wise, was killed in a terrorist attack on a CIA outpost in Afghanistan in December 2009. He was a former Navy Seal working as a security contractor.
Their brother, Marine Corps Cpl. Matthew Wise, is based in Hawaii but was in Germany to be with his brother, his wife Amber said. She said she was at Benjamin's home in Washington state watching his children, but she declined further comment.
The Army Special Forces soldier is survived by his wife, two sons and a daughter.