Watch how Obamacare will make this happen.  The video is from a Catholic organization and has solid facts and references.  We can still fight Obamacare before it takes us out.

Description:  William Toffler, MD at the Oregon Right to Life Conference on April 24, 2010.

Muslims think they're better than Christians because they believe they have the greatest and last prophet, Mohammed teach them about God. Their understanding of Jesus comes from their view that Jesus was a great moral teacher or a minor prophet. If they want to know who Jesus is, they need to go beyond their own narrative and be pleasantly surprised. After that, they may need to run for their lives from Islam. But at least they will find the truth and the life.


If the video fails, go to http://www.youtube.com/watch?v=-CExvHJxJnY

Others:
http://www.youtube.com/watch?v=19FU7Yyx4D4&feature=PlayList&p=DF98532A8BC7E830&playnext_from=PL&index=29&playnext=1
Muslim clerics in the Middle East and North Africa are leaving Islam for Christianity, according to Father Zakaria Boutros.
Father Zakaria is an Egyptian Coptic priest who was kicked out of his country for converting Muslims to Christ. Today he has a ministry to the Muslim world through his satellite TV broadcast, 'Truth Talk.'
Broadcast daily into the Middle East, the program challenges Muslims to examine their faith and encourages them to discuss issues in an Internet chat room on Pal Talk.
Watch the interview to learn how those broadcasts are leading Muslim clerics to Christ.
Original source : http://www.cbn.com/cbnnews/35307.aspx


In his famous book Mere Christianity, C.S. Lewis makes this statement, "A man who was merely a man and said the sort of things Jesus said would not be a great moral teacher. He would either be a lunatic--on the level with a man who says he is a poached egg--or he would be the devil of hell. You must take your choice. Either this was, and is, the Son of God, or else a madman or something worse. You can shut him up for a fool or you can fall at his feet and call him Lord and God. But let us not come with any patronizing nonsense about his being a great human teacher. He has not left that open to us."


If the video fails, go to  http://www.youtube.com/watch?v=fV18QAj6UIY&feature=player_embedded#!
2 comments
Email ThisBlogThis!Share to TwitterShare to FacebookShare to Pinterest

At least, it's not Bush's fault anymore. 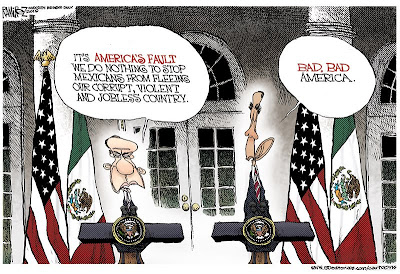