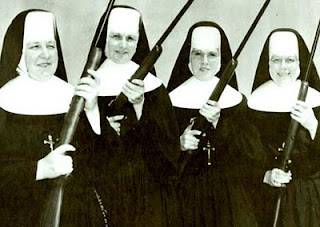 We're looking for those faithless women in the CHA who are masquerading as nuns. They are a threat to the Christian community by confusing others with their disobedience, isolence, arrogance, pride and fashion violations. Polyester pantsuits are so 70s. In keeping with the Gospels, we're going to have a little "fraternal" correction. They might be having too much ecstasy - and not the spiritual kind if you know what we mean. And Obama's pen is not going to relieve their frustrated desires to be ordained. So if they can clean up their mess with a public retraction, it will shave off decades from their sentences in Purgatory and be a good preparation for a happy death.  You never know when a Jihadist will hijack their earthly pilgrimage.

On a less flippant tone, their latest crime is supporting Obamacare in spite of the bishops' teaching and mandate.  To quote from an interview..


ALLEN: From your point of view, is this ultimately an ecclesiological question – who speaks for the church?
CARD. GEORGE: Yes, exactly. Our disagreement may be narrow, but it’s a narrow difference that has exposed a very large principle. It affects the nature of the church, and therefore it has to concern the bishops.
I know this comparison may seem dramatic, but a few years ago Cardinal von Galen of Munster [Germany] was beatified. Under the Nazis, von Galen not only condemned euthanasia as an unethical procedure, but he also condemned the laws which permitted it. Today we think of him as a hero, and rightly so. This is the question that has to be raised: Are we to offer moral teaching solely about actions, or also the laws which permit and foster them?"


These nuns think they can speak for the Church.  So, they offer an alternate teaching.  And the media whores quickly pick up on the scandal that they're causing.  They're applying American principles of independence and feminism in places where those do not apply.  The community of faith is not a democracy even if they want to make it such and have themselves voted into power.  The community of believers are not independent from their traditional and historical origins and an American revolution will not change that nature.  But deluded with their degrees and having too much time in their hands plus the limelight of a secular press, these women forge on and wound the very people that they pretend to serve.


But rather than curse them to hell as I feel like doing, I close with a silent prayer for their conversion.