A radical reordering of US economy to wage war on poverty.

While appearing on MSNBC's The Ed Show, civil rights leader Jesse Jackson called for a "radical reordering" of the nation's economy because, as he put it, "those, the very top are drowning in wealth.
...He also called on the President to go to Congress and push for a "revived war on poverty".  more from Examiner

This seems to be the Democrat's forte as they pretend to champion the poor as they sacrifice their own careers.  But wait...  If video fails, go to http://divine-ripples.blogspot.com/2010/12/radical-reordering-of-us-economy-to.html

Related:   Liberals give until it hurts (you)
1 comments
Email ThisBlogThis!Share to TwitterShare to FacebookShare to Pinterest

If video fails, go to http://divine-ripples.blogspot.com/2010/12/funny-church-signs.html

The Lizard Story. A model of love. 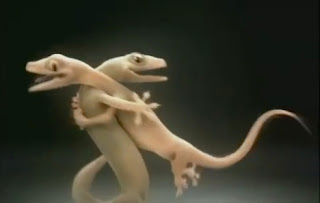 This is a true story that happened in Japan .

In order to renovate the house, someone in Japan breaks open the wall.

Japanese houses normally have a hollow space between the wooden walls..

When tearing down the walls, he found that there was a lizard stuck there
because a nail from outside hammered into one of its feet.

He sees this, feels pity, and at the same time curious, as when he checked
the nail, it was nailed 10 years ago when the house was first built.

In a dark wall partition for 10 years without moving, it is impossible and
mind-boggling.

Then he wondered how this lizard survived for 10 years!!! Without moving a
single step--since its foot was nailed!

So he stopped his work and observed the lizard, what it has been doing, and
what and how it has been eating.

Later, not knowing from where it came appears another lizard, with food in
its mouth.

Ah! He was stunned and touched deeply. For the lizard, that was stuck by
nail, another lizard has been feeding it for the past 10 years...

Imagine? it has been doing that untiringly for 10 long years without giving
up hope on its partner.

Imagine what a small creature can do that a creature blessed with a
brilliant mind can't.

Please never abandon your, Parents and loved ones. Never Say You Are Busy
When They Really Need You.

"Love is the ocean which accepts all manner of the rivers without
questioning their origin."

If video fails, go to http://divine-ripples.blogspot.com/2010/12/new-year-text-msgs.html

If you text and drive, please watch for your sake.  You can either die, turn into a veggie or be forever remorseful.  Exciting footage of actual, not staged, accidents.
0 comments
Email ThisBlogThis!Share to TwitterShare to FacebookShare to Pinterest

HOW TO REALLY LOVE A CHILD

If video fails, go to http://divine-ripples.blogspot.com/2010/12/how-to-really-love-child.html

HOW TO REALLY LOVE A CHILD
Be there. say yes as often as possible. let them
bang on pots. if they’re crabby, put them in
water. if they’re unlovable, love yourself. realize
HOW important it is to be a child. Go to A
movie theatre in your PAJAMAS. read books
out loud with joy. invent pleasures together.
remember how small THEY are. GiGGle A lot.
surprise them. say no when necessary. teach
feelings. Heal your own inner child.  learn about
parenting. Hug trees together. Make loving safe.
Bake A cake and eat it with your hands. Go
Find elephants and kiss them. plan to build a
rocket ship. imagine yourself magic. make lots
of forts with blankets. let your angel fly. reveal
your own dreams. search out the positive. Keep
the gleam in your eye. Mail letters to GOD.
encourage silly. plant licorice in your garden !
open up. stop yelling. express your love  ! a lot.
speak kindly. paint their tennis shoes. Handle
with caring.
CHILDREN ARE MIRACULOUS
from http://www.planetsark.com/eshop_products_posters_feat_02.htm

The Democrats realize the need to repackage themselves and are turning to Hollywood for the job.  It might have begun with this little muppet song and dance that portrays Obama as someone who's trying to do good yet failing because of events beyond his control.  Watch how he is offended by Biden's fowl mouth.  If video fails, go to http://divine-ripples.blogspot.com/2010/12/obama-biden-2010-year-in-review.html


If they think that this cute little item will make people forget who Obama is and what he stands for, then they have misjudged the people.

Maldives for the Summer?

Watch how this couple is ridiculed and cursed out for being non-Muslims during a wedding ceremony by the presider himself.  If video fails, go to http://divine-ripples.blogspot.com/2010/12/maldives-for-summer.html

Save the date for the annual March for Life.