My grandma’s first wages was in US silver dollars. She had them forged into a Rosary then gave them to my mom. I don’t recall seeing my mom use it much but she prayed when in crisis. Once she was visited by a dead aunt who asked about me, she prayed the Hail Mary. But the aunt did not vanish; she prayed back with the Holy Mary. I was an infant then but that exchange might have affected me.

Fast forward to 2nd grade. I volunteered to bring our statue of Mary for the shrine building contest. And this happened every year until 6th grade. Also, I visited the Blessed Sacrament during recess and stopped to talk to a life sized statue of Mary Help of Christians. Although she didn’t answer (interlocution), I felt relieved after the talk.

Around 30 years after, I heard about the events at Conyers, GA. I thought if our Lady took the trouble to come over, then the least that I can do is to be there. So, I flew over, slept at a hotel, rented a car and drove to the site at the scheduled date. When I got there, I walked and looked around hoping for something awesome – like a dancing sun. But there was nothing except for the realization that God is most offended by abortion, a heinous sin that has blinded many. Upon my return, I called on a few friends to join me in stopping abortions. Weekends after that, we stood at the gates of the clinics holding pictures of a fetus to show the mother that she’s not popping a zit but killing a person - with a head, torso, arms and legs. That was a harrowing experience but we came out unscathed; because, we prayed the Rosary every time.

Now for the pièce de résistance. In was during that campaign when I woke up one Friday morning with the assurance that I will meet the Blessed Mother that day. There was no nervousness, anxiety or distress. It felt serene and peaceful with subdued anticipation. I was off that day so, I visited to the basilica of the Immaculate Conception as I did those days. I went to shop below and got a statue of Our Lady of the Americas. I don’t know about that apparition, but our Lady is our Lady no matter where she shows up; besides, it was on sale.

She said, “What’s in the bag?” “It’s a statue of our Lady”, I replied. She asked to see it and I showed her. “She’s beautiful” she said. “What’s your name?” I asked. “Sophia” she answered. By this time, I smelled the stench of urine from her unwashed jeans. I also noticed her bare feet with chipping red nail polish. She wore a white T-shirt, was medium built, around 5’ 6” with fair complexion. Her hair was flat and long and her face was average for want of a better term. It was neither ugly nor beautiful. Besides, I did not really check her out because at the back of my head, she could be the Blessed Mother. Long story short, we parted casually although I asked her for prayers after handing her a couple of bucks. I didn’t know what I was thinking.

Later, I told a priest about it.  He said there are a lot of homeless women in the area. Then I thought that Mother Mary didn’t have much, if any, after St. Joseph died and the Lord left home to preach. Was she also homeless when she started to follow her son? And, “Sophia” is Greek for wisdom; one of her titles is “Seat of Wisdom”. Finally, she came out of the Guadalupe chapel. Our Lady of Guadalupe is the Patroness of the Pro-life movement. 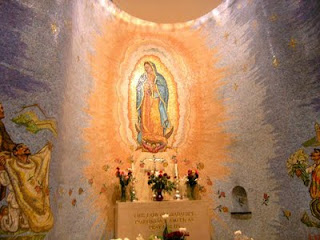 But it can all be a coincidence but not for me. Ever since, our Lady is no longer a person whom I read or heard about. She's Sophia who had no place to lay her head yet had time to pray at her Father's house.  She's my friend and I am her servant.

Right photo:  Chapel of Our Lady of Guadalupe
2 comments
Email ThisBlogThis!Share to TwitterShare to FacebookShare to Pinterest

A visit from the queen of apostles with a message to her son's followers: