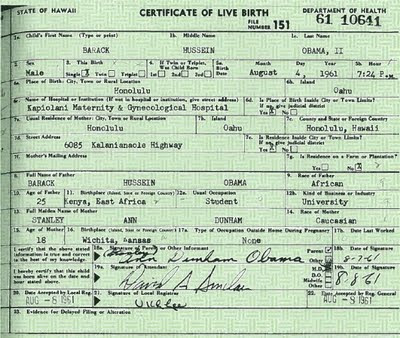 "And now, let’s compare the birth time and the dates of the signatures on your long form cert abstract to the Coast Province General Hospital, Mombasa, British Proctectorate of Kenya, Barack Hussein Obama II Certificate of Birth to one another. I’m sure you see what I see, Sir. Your boy genius, the Official Document Maker Czar, has just effectively tied you to the Kenyan Birth Certificate a Lucas Smith bribed to get from Kenyan officials." from GiveUsLiberty

My comments:
It could not have been the other way around as the long form has been strictly guarded
Also, if they can check if the footprint matches, then that will settle it.
Right now, the POTUS looks like a fake.  Would that invalidate all his orders?  I certainly hope so.
1 comments
Email ThisBlogThis!Share to TwitterShare to FacebookShare to Pinterest

Heidi:  Who Spoke Out Against Islamists.  "Germany, You Have to Rise!"


NEW INTERVIEW WITH HER HERE!! : http://www.pi-news.org/2011/04/pi-interview-with-heidi-the-courageous-german/  From this Weeks muslim rally in Frankfurt hosted by mad convert pierre vogel feat. Bilal Philips - German video from Pax Europas Channel http://www.youtube.com/user/BPEinfo
Glenn Beck: Comments About German Woman Who Spoke Out Against Islamists In Their Rally 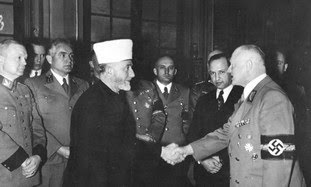 She Did Want New Hitlers To Get Far.
(And Muslims Vowed To Finish What Hitler Started.)

NEW INTERVIEW WITH HER HERE!! : http://www.pi-news.org/2011/04/pi-interview-with-heidi-the-courageous-german/  Watch the Video of the protester here http://www.youtube.com/watch?v=u-ELZk_X6_k
0 comments
Email ThisBlogThis!Share to TwitterShare to FacebookShare to Pinterest

Obama Admin Violates Establishment Clause of the First Amendment of the U.S. Constitution.

If video fails click here or go to http://divine-ripples.blogspot.com/2011/04/obama-admin-violates-establishment.html.

http://www.answeringmuslims.com/
The U.S. government condemns burning the Qur'an. Yet the U.S. government burns Bibles. This is a clear violation of the Establishment Clause of the First Amendment of the U.S. Constitution.
0 comments
Email ThisBlogThis!Share to TwitterShare to FacebookShare to Pinterest

Message from Frank Gaffney: The Center for Security Policy today unveiled a powerful 1-minute video opposing the construction of a 13-story, $100 million mega-mosque near the hallowed ground of the World Trade Center. The Twin Towers were destroyed on 9/11 by adherents to the barbaric, supremacist and totalitarian program authoritative Islam calls "Shariah." And the imam who is promoting this mosque has publicly declared that he seeks to "bring Shariah to America."
As the ad makes clear, Shariah's followers have long built mosques on the most sacred sites of those they have conquered -- for example, on Jerusalem's Temple Mount, at Constantinople/Istanbul's St. Sophia Basilica and in Cordoba, Spain, the capital of the occupying Moors' Muslim kingdom.
A growing chorus of New Yorkers and other Americans -- including, notably, former Alaska Governor Sarah Palin -- have expressed outrage at the prospect of a similar, permanent beachhead for Shariah being use to defile Ground Zero, and symbolize America's defeat at the hands of her enemies. We say, "No Mosque at Ground Zero."

If video fails, click here or go to http://divine-ripples.blogspot.com/2011/04/al-aqsa-st-sophia-cordoba-next-nyc.html
0 comments
Email ThisBlogThis!Share to TwitterShare to FacebookShare to Pinterest

Islam - A Critique By St. John Of Damascus

If video fails click here or go to http://divine-ripples.blogspot.com/2011/04/islam-critique-by-st-john-of-damascus.html
A critique of the heresy of Islam by our Holy Father St John of Damascus
For more information regarding Islam and Orthodoxy see: http://www.orthodoxinfo.com/general/gen_islam.aspx
0 comments
Email ThisBlogThis!Share to TwitterShare to FacebookShare to Pinterest

PAKISTAN: Sex Slavery in Islam. Victims will be Prosecuted. (video)

In 1979 the Islamic regime of Pakistan introduced changes that plunged the country deeper into Sharia; It made laws about rape and sex crimes more accurately reflect the standards of proof and punishment for this crime as dictated in the Quran. The law concerning rape was made part of the ordinance, called The Offence of Zina (Enforcement of Hudood) Ordinance, VII of 1979 (the term zina encompasses adultery, fornication, rape and prostitution). The ordinance also deals with the crimes of fornication and adultery which were not regarded as crimes in Pakistan before 1979.

In 1977 General Zia took power after a military coup. When he failed to fulfil his promise of holding elections, he tried to justify his rule on the grounds that God had given him special responsibility to turn Pakistan into a truly Islamic state. He made vast changes in the criminal law as well as in the constitution of Pakistan. Apart from zina, he introduced Islamic punishments for theft and the drinking of alcohol etc. General Zia's rule of ten years became known as a period of Islamization. He died in an aeroplane accident in 1988.
Benazir Bhutto, a woman succeeded him as President. Her election program included the undertaking to abolish all laws discriminatory to women. But until now she has been unsuccessful at reverting ANY of the laws passed during Islamization.

Sexual Slavery is not prohibited in Islam, according to the Quran. The holy Prophet Mohammed himself had sex slaves. However prostitution is prohibited.


My comment:  Rather than critique Islam from a theological or philosophical perspective, one can appraise this faith system from it's praxis - the practical aspects.  Here we see a monstrous, subhuman treatment of girls who are exploited then condemned under Islamic law.  This so called faith system shows itself as anything but.  This perversion and immorality puts Islam in the level of a Satanic cult.