Hardwork, attitude, love of God. Mathematical 'evaluation' of these intangibles.

Math proves that hardwork gets you close, attitude gets you there and love of God puts you over the top.
If video fails, go to http://divine-ripples.blogspot.com/2011/01/hardwork-attitude-love-of-god-with.html 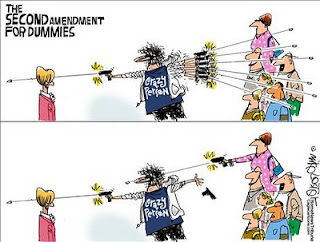 from Mike Lester
To outlaw guns is to give bandits an edge, don't you think?  It's not like they'll comply and use sling shots instead.  So, lives would have been spared if someone packed heat as the cops can't be everywhere.
0 comments
Email ThisBlogThis!Share to TwitterShare to FacebookShare to Pinterest

Palin on 'blood libel' and AZ deaths; Lefts' call for her murder

Here is Sarah Palin's rational, sensible and compassionate response to the murders in Arizona.  If video fails, go to http://divine-ripples.blogspot.com/2011/01/palins-response-to-blood-libel-charge.html

A video statement from Gov. Palin in response to the recent events surrounding the terrible atrocities committed in Tucson, Arizona and the charges of "blame" that followed.  Sarah Palin responds to criticism she's received after the attempted assassination of Rep. Gabrielle Giffords: "Vigorous and spirited public debates during elections are among our most cherished traditions. And after the election, we shake hands and get back to work, and often both sides find common ground back in D.C. and elsewhere. If you don’t like a person’s vision for the country, you’re free to debate that vision. If you don’t like their ideas, you’re free to propose better ideas. But, especially within hours of a tragedy unfolding, journalists and pundits should not manufacture a blood libel that serves only to incite the very hatred and violence they purport to condemn. That is reprehensible."

On the other hand, here are blood lusting tweets of the supporters of Obama and the Democrat as they call for the killing of Sarah.  This is what some Americans have become after being immersed into a culture of death, corruption and dependence by Liberals and Democrats.  This moral disintegration is exactly what communists and jihadists use to destroy a country from within.  Looks like Obama has made quite an impact.