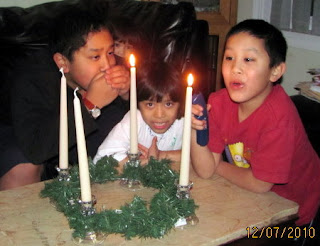 It is too late to order online and too difficult to find a Catholic store open after work. But the dollar stores have everything needed to make an Advent wreath – for a buck. I got a wreath, candle stands and candles. I didn’t even use pliers to twist the wires around the candle stands and there you have it.

An Advent wreath sets the tone for the weeks before Christmas. It is a way for us to take back our season from the vendors, to overcome commercialization with spirituality. And coming closer to home, it forms our children to value not the presents under the tree but The Present from the Heavenly Father.

Advent is all about preparation and anticipation as St. John the Baptist exhorted the people to fill the valleys and level the mountains. The wreath itself is an educational tool. The circle has no beginning or end – just like eternity or God. The evergreen leaves in the wreath in the dead of Winter is life – just as Jesus Who is the Life. The four candles are the four weeks. Every week, we light one and the place is brighter. Since Jesus is the Light, the place gets brighter the closer He gets. The candles should be purple – a color of penance and royalty: penance for our sins, royalty for the King of kings. So, this little thing stresses preparing and anticipating the comings of Jesus.
Fr. Z mentions the ways that Jesus has come as, “He came historically at Bethlehem in the fullness of time. In the liturgical year he comes to us sacramentally. He will come again at the end of the world as Judge of the living and the dead. Christ comes to us also in the two-fold consecration of the Body and Blood of Christ by the priest at Holy Mass and, in a special way in a good Holy Communion. He comes in the person of the priest, who is alter Christus, another Christ. He comes in the words of Holy Scripture. He also comes in the person of our neighbor, especially those who are in need of the spiritual and corporal works of mercy.

During Advent, John the Baptist has been reminding us in the liturgy to "make straight His paths". When we come to the Lord in death, or He comes to us in His Second Coming, He will make straight the path whether we have during our earthly lives done our best to straighten it ahead of time or not.”

Here's a video about Advent - as a time to slow down, prepare and anticipate.
If video fails, go to http://divine-ripples.blogspot.com/2010/12/my-dollar-store-advent-wreath.html

To the tune of 12 Days of Christmas, here are 12 comments often heard about a big family here in the US.  Really funny.

(H/T to CMR)  If video fails, go to http://divine-ripples.blogspot.com/2010/12/5th-ripple-due-next-month-prayers.html


(The fifth divine ripple is coming next month.  If you can spare a prayer for her safe delivery, I thank you.  )
0 comments
Email ThisBlogThis!Share to TwitterShare to FacebookShare to Pinterest

Wednesday, November 10, 2010; 12:02 AM JAKARTA, INDONESIA -  "Speaking before thousands in the city that helped raise him, President Obama on Wednesday cited this country's transition from dictatorship to democracy as a model in an Islamic world often governed by unelected autocracies. He also praised Indonesia - the world's most populous Muslim-majority nation - for a "spirit of tolerance that is written into your constitution, symbolized in your mosques and churches and temples, and embodied in your people," a quality worthy for all the world to emulate." Source: WaPo

Watch this video to see the Muslims' response to a Christian's trial for letting Muslims join in her Catechism class.   Why do you want the world to emulate this, Mr. Obama?

If video fails go to http://divine-ripples.blogspot.com/2010/12/obama-hails-indonesia-as-model-of.html

If video fails, go to http://divine-ripples.blogspot.com/2010/12/indonesian-christians-jailed-for.html

Three Indonesian Sunday school teachers - Rebekka, Ratna, and Eti - were imprisoned back in May 2005 for converting Muslim children to Christianity.
CBN News recently visited the women at the local prison in Indramayu, Indonesia and discovered they were still sharing their faith behind bars.

They have remained in high spirits although they have now spent two years in jail for a crime that most people say they did not commit.

In 2005, the three Sunday school teachers were put on trial after a group of Muslim radicals in their village accused them of converting their children to Christianity.

Evidence was presented suggesting the Muslim parents were aware their children attended Sunday school with their Christian friends. Regardless, the court still pronounced the women guilty and sentenced them to three years in prison.

"I call this prison 'a school of trust in God,'" said Rebekka, one of the jailed school teachers. "I think it's not easy to be a prisoner, but everything is easy with the Holy Spirit.

She continued, "My life is proof that Jesus is very faithful to me in this jail, because He supplies our needs, never leaves me. They ask me, 'Why do you never look so sad in prison?' I told them this joy in my heart and peace in my heart is because of Jesus."

The three women did not keep their faith in Christ to themselves. They shared it with fellow inmates.

Edi Koswara was one of those inmates. He is in jail for stealing a motorcycle and says it was the kindness of Rebekka that led him to ask her about Jesus.

"I saw the kindness of Jesus on her face. I know every child of God has joy on his face. I want the same and know about this," said Edi.

And Edi, the former Hindu and Muslim, embraced Christianity.

She said, "I know Jesus has died for me and has forgiven my sins. When I die, I know I will be with Jesus in heaven.

Inspired by biblical passages, Edi made several paintings which Rebekka used in her Bible studies.

Rebekka says she believes all the good things that happened to them inside the prison were answers to the prayers of Christians from around the world.

And prayers for their early release have also been answered. Eti, Ratna and Rebekkaa will be freed on parole in June.

But will the three women stop teaching Sunday school to the children?

"Of course not! No," said Rebekka. "But we must be wise because they will watch us."

But with their heavenly father closely watching them, Eti, Ratna and Rebekka said they are confident that their future is secured.

http://www.cbn.com/CBNnews/167245.aspx
0 comments
Email ThisBlogThis!Share to TwitterShare to FacebookShare to Pinterest

"The pro-life offices of the Archdiocese of Washington and the Archdiocese of Baltimore are inviting one and all to join them at 8:00am Mass on Saturday, December 11, at Mother Seton Church. The church is located on Father Hurley Boulevard: right around the corner from the Germantown Reproductive Health Services. After Mass, there will be a procession to the sidewalk of Wisteria Drive, in front of the office complex where GRHS is located. After some prayer, all will process back to the church."

"Last month, while speaking at the University of Indonesia in Jakarta, Mr. Obama was trying to stress the similarity of the U.S. and Indonesia and said "it is a story written into our national mottos."


"In the United States, our motto is E pluribus unum — out of many, one," he said, then compared it to the Indonesian motto, "Bhennika Tunggal Ika — unity in diversity."

The official motto of the U.S., designated by a 1956 law, is "In God We Trust." E pluribus unum is the motto on the Great Seal of the United States, and appears on the ribbon held in the beak of the eagle that dominates the obverse side of the seal."

This is not the first time Obama has dropped the reference to Creator from national statements that has them to begin with e.g. the Declaration of Independence.  Now why is this?  Could it be that the Creator is not the same as Allah?  Probably so.  Allah is a caricature designed by Mohammed to legitimize his extortions, lust for children  and murder of Christian and Jewish people.
1 comments
Email ThisBlogThis!Share to TwitterShare to FacebookShare to Pinterest
Newer Posts Older Posts Home
Subscribe to: Posts (Atom)