Video: What the Seminaries Skipped About Islam is Lethal

Islam was touched during the theology of the Church, Ecclesiology.  It used Lumen Gentium as a reference that dwelt glowingly about the Abrahamic faith and other items that we have in common with Moslems.  And when I studied and worked with Moslems in the States, I found them to be rational and peaceful.  So, I kept this vision about their religion and dismissed the terrorists as fanatics who misunderstood their religion.  When I asked about jihad, I was told that it is an internal spiritual war with our sinfulness.  But the more I get exposed to the unsavory facets of their faith, the more the doubt whether the Moslems whom I know are aware of the extreme teachings but chose to live peacefully because, they think for themselves and follow their common sense.
But it won't help if I continue to ignore and smooth over truths about Islam that are problematic.  So, I post this video that claims, with references, a less popular view of the theo-political nature of this belief system.  And the point made is that, unless this is understood and accepted or considered, then the problem with the Islamic conflict will never be addressed correctly.
http://www.youtube.com/watch?v=TkGQmCZjJ0k&feature=player_embedded#!
1 comments
Email ThisBlogThis!Share to TwitterShare to FacebookShare to Pinterest 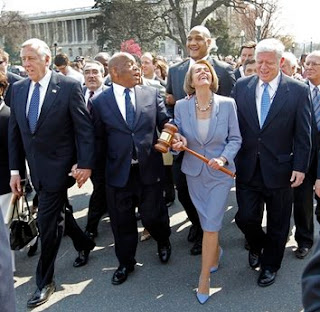 She’s done it again, this time with the bishops -lecturing them to get their flock to support legislation. Last week, she tried to address the priests. So, what's with her?

In my opinion, she’s turning them into useful idiots and  posturing for November. If she can get the bishops to collaborate or even respond, she will appear that she or her party, is in speaking terms with the Church and enlist them into promoting their agenda.  And appearances are everything. If you recall, the Pope did not want to have any appearance with her to the point that they was no photo op during her visit.

Now, she’s grabbing this opportunity to rally the Church in pursuing immigration reform. I wonder if she thinks the Church has forgotten about her role in forcing Obamacare that will lead to millions of abortions and how she ignored her bishop’s counsel and admonitions ?
She hasn’t but she thinks that the Church will fall for her shenanigans. Already, her video clips are being circulating in the ether albeit in a negative light. I won’t attach any of them here. But I noted this to highlight the power of the Catholic vote. And consequently, the grave duty of the leaders to educate and guide the believers about the immorality of supporting pro-abortion politicians like many in the Democratic party.

Hopefully people don't give this new round of posturing any attention. She’ll be lucky if she gets a response like, “Tie a millstone around your neck and drown yourself.” (Mk 9:42)  That as you can see, is an apprioriate Biblical counsel given her legislative activities.