Description: Kids have many influences in their lives that often steer them off course from Christ. Many of their responses in life's situations will feel natural to them yet will leave them empty and alone. Dads, though, have a unique opportunity to model Christ's example to their children even when no one else will.
0 comments
Email ThisBlogThis!Share to TwitterShare to FacebookShare to Pinterest 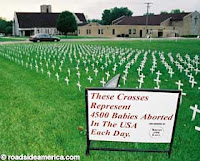 Since abortion became legal, around 50 million people have been murdered by it. If every aborted person will be given a square foot of burial space, then 50 million will take 1.79350 square mile, which can be rounded up to the entire Winthrop, MA ( 2 square miles).
If there is an 8 hr./day, 5 day/week job where one will count every second until 50 million, one will take 6 years & 8 months to finish.
The sins of Sodom and Gomorrah already pales in comparison now. If the current healthcare reform will pass, then we can expect the abortion rate to increase 10 fold. I shudder to do the math and find comparisons, but that would be an immense amount of blood crying out to the Creator.
0 comments
Email ThisBlogThis!Share to TwitterShare to FacebookShare to Pinterest
Newer Posts Older Posts Home
Subscribe to: Posts (Atom)