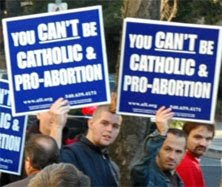 Just as Henry VIII sought St. Thomas Moore's approval for his divorce, Obama continues to court good Catholics to bless his pro-abortion efforts. He surrounds himself with Catholics like Biden, Sebellius & Pelosi. He tries to ignore our pro-life concerns as a 90's cultural ideology. He depreciates our cause as a lesser evil in the context of a bigger problems e.g. war, poverty, disease and ignorance. He ridicules us as irrational and divisive extremists. He rationalizes his stance as simply tolerating abortion. Then he negotiates by saying he's for reducing abortion and using only throw away embryos.
But why target the Catholics? Is it because we have the power to keep him from being re-elected? If those 54% did not vote from him, he won't win. So, there's a big chance of "buyers' remorse" as people realize that Obama cannot walk the walk. 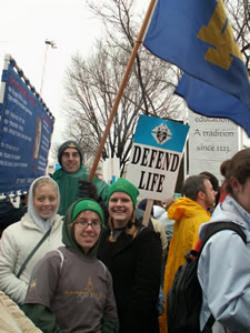 Is it because we can be violent? Afterall, we're already listed as possible terrorists in a communique with law enforcement agencies. But that's not true because, liberation theology has long died. So, Catholics won't start bombing federal buildings anytime soon.
Is it because we can't be bought? The good ones can't be bought just like St. Thomas. Others have sold out the unborn babies with the justice of Pontius Pilate. They chose a political career even at the cost of excommunication. Why people would pay with unending torment in hell for a stint of power is beyond me. But there are even clerics with the spirituality of Judas Iscariot who encouraged others to vote for Obama and now continue to support him. For Obama, their support provides little solace just because they're traitors. Their word and support is worthless.
On the contrary, good Catholics speak the truth whether or not it is convenient. This would make any person re-appraise what is truth if there is a smidgen of honesty left in him. Not only are good Catholics faithful to the truth, they have the courage of their convictions. They wake up anyone from his self-deceptions. In the show down between the lackies of Planned Parenthood and Catholics, there is no doubt the Catholics will prevail because, they are more committed. Good Catholics are witnesses to the truth of the alienable right to life bestowed by God to the unborn; others are moved by bling that runs out.

That is why Obama wants the approval and support of good Catholics. If we absolve him of his sins then he thinks his guilt will stop and he can start to sleep again. But the only way for that to happen is for him to respect life.
2 comments
Email ThisBlogThis!Share to TwitterShare to FacebookShare to Pinterest
Newer Posts Older Posts Home
Subscribe to: Posts (Atom)