As the ruling party in the US government moves forward with their expansion of abortion coverage disguised as a health reform bill, a new apparition of our Lady has been reported in Cairo last week.  It is as though our Mother is comforting us to not lose heart in the face of a seemingly unstoppable advance of those who promote and support the murder of the unborn.

Report Source:  http://weekly.ahram.org.eg/2009/977/fr2.htm
"...On Monday the Coptic Orthodox Bishopric in Giza issued a statement: "On 11 Friday, at 1am, a full apparition of the Virgin Mary on the right dome of the church was reported by at least 3,000 people. She appeared in her usual heavenly blue costume. She was crowned and the concrete cross on the dome was placed on top of her crown. Those present captured photos and videos of the Holy scene," read the statement. The scene, as described, was broadcast on Amr Adib's talk show "Cairo Today" on 13 December."

The Apparition of the Blessed Virgin Mary in Cairo, Egypt - 16 December, 2009

Did Ganesha Avenge the Christians in Orissa 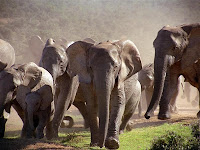 In July 2008 a severe persecution of Christians broke out in the Indian state of Orissa. A 22 year old nun was burnt to death when angry mobs burnt down an orphanage in Khuntpali village in Barhgarh district, another nun was gang raped in Kandhamal, mobs attacked churches, torched vehicles, houses of Christians destroyed, and Fr. Thomas Chellen, director of the pastoral center that was destroyed with a bomb, had a narrow escape after a Hindu mob nearly set him on fire.  The end result saw more than 500 Christians murdered, and thousands of others injured and homeless after their houses were reduced to ashes. Recently a strange and dramatic event took place in Orissa, which has many people talking and wondering.


In recent months, herds of wild elephants have begun to storm villages that are home to some of the worst persecutors of Christians during the troubles.  In one village, where in August a year ago the Christians had to run for their lives while their homes were being destroyed by rioters, a herd of elephants emerged from the surrounding jungle exactly one year later, in July 2009, at the same time of the day of the attack.