Origins of the Fighting Irish 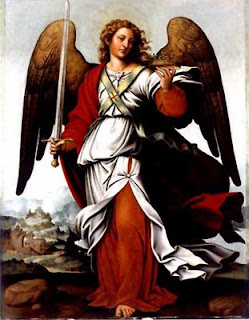 I've always wondered about the "Fighting Irish". What's with the fighting? For a Catholic people, it seems contradictory. Folks at http://catholic-dads.blogspot.com/ had this to say.
Thomas More says, "I think it has more to do with the Irish Brigades that fought on the side of the Union during the Civil War."
RobK states,   "The most generally accepted explanation is that the press coined the nickname as a characterization of Notre Dame athletic teams, their never-say-die fighting spirit and the Irish qualities of grit, determination and tenacity. The term likely began as an abusive expression tauntingly directed toward the athletes from the small, private, Catholic institution. Notre Dame alumnus Francis Wallace popularized it in his New York Daily News columns in the 1920s."
But my favorite explanation is from the late Archibishop Fulton Sheen.   It's been said that during the war between Lucifer's legions and God's faithful angels, a third group of angels stayed on the sidelines - taking neither side. At the end, these neutral angels were also banished from heaven until judgment day. Though they were not condemned in hell, they were sent to Ireland. Ever since, they have inspired the people there to fight the good fight.
0 comments
Email ThisBlogThis!Share to TwitterShare to FacebookShare to Pinterest
Newer Posts Older Posts Home
Subscribe to: Posts (Atom)