Don't cry for me America. It's not about me; it's about you. 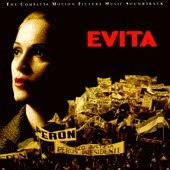 Stunned by the upset victory of Senator Brown in MA, the Democrats led by President Obama started to reaffirm their position as champions and servants of the people.  They reactivate their propaganda machinery to avert a similar backlash this Nov.  President Obama himself takes the road with the message, "It's not about me;  it's about you."

Then, he side steps to redirect the cross-hairs of popular anger to the bankers and their bonuses.  "They're the cause of your misery and why the economy failed."  Like Juan and Evita Peron of Argentina, he poses on the side of the poor and yells, "Give us justice."  It's the same script of every dictator who grabs power by justifying it as fighting for the oppressed.

But who is the real champion of the poor and who uses them for his advantage?  It is not he who kills the goose the lays the golden eggs by over-regulating the financial industry to the point that capital investment dries up and wilts the source of a dignified livelihood.  It is not he who oppresses the rich in the name of justice for justice is not brought about by injustice.

For as the Lord Jesus states, "The poor will always be around."  And people like Judas will continue to feign concern to help themselves instead.  The test on whether a person is truly concerned to help the poor is through the integrity of his character.  It he has lied to the people before, then the chances of him lying now is quite likely.