I think that it is the victims' prerogative to forgive (or not) the Muslims that ended or broke their lives.  To forgive in their stead is unconscionable.  How dare anyone presume for the dead or bulldoze the survivors into positions.   Why not hear them out and for once be respectful and sensitive to their anguish.  If video fails, go to http://divine-ripples.blogspot.com/2010/08/video-surviving-victims-of-ground-zero.html

Catholic saints with a Muslim father. 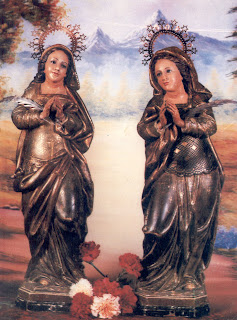 Saints Nunilo and Alodia were a pair of 9th c. virgin martyrs in Huesca, Spain.  They were born to a Muslim father and Christian mother.  However, they chose their mother’s Christianity. And so during the Emirate of Abd ar-Rahman II it came to pass that these little girls were first put in a brothel and then were executed as apostates according to Sharia law. Their feast day is 22 October.  Source: http://wdtprs.com/blog/2010/08/a-counter-proposal-for-the-mosque-at-ground-zero/

The Speaker of the House threatened those who are pushing to find the source of  the funds for the proposed mosque at ground Zero.  Speaking on San Francisco's KCBS radio, Pelosi said:  "There is no question there is a concerted effort to make this a political issue by some. And I join those who have called for looking into how is this opposition to the mosque being funded," she said. "How is this being ginned up that here we are talking about Treasure Island, something we've been working on for decades, something of great interest to our community as we go forward to an election about the future of our country and two of the first three questions are about a zoning issue in New York City."

That sounds like intimidation and harassment.  But more importantly, what is she afraid of?  One might suspect that the source of funds will be even more controversial than building this abomination.  Will it be funded with stimulus tax monies?  That is not a stretch because, there are reports that this is already being done abroad and in the process the administration is engaging in religious preference contrary to the law of the land.  I did a search on "tax dollars mosques" and got 10 pages.  Here are some of the links:
http://www.washingtontimes.com/news/2010/aug/10/tax-dollars-to-build-mosques/
http://www.freerepublic.com/focus/f-news/2570331/posts
http://liberty.spruz.com/pt/Tax-dollars-to-build-mosques-both-at-home-AND-ABROAD/blog.htm
0 comments
Email ThisBlogThis!Share to TwitterShare to FacebookShare to Pinterest
Newer Posts Older Posts Home
Subscribe to: Posts (Atom)