The Hour of Islam at 9-11-2001 will return because we refuse to identify the enemy. 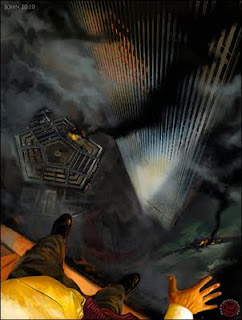 "The Hour of Islam 9-11-2001"
Article source:  http://www.carolineglick.com/e/2011/09/the-war-america-fights.php   by Caroline Glick
"But 10 years on, the fact that Islamic terrorism directed against the US remains a salient threat to US national security shows that the War on Terror is far from won.
And this makes sense. Despite its significant successes, the War on Terror suffers from three inherent problems that make it impossible for the US to win.
:
:The second problem is that since September 11, 2001, the US has steadfastly refused to admit the identity of the enemy it seeks to defeat.

US leaders have called that enemy al-Qaida, they have called it extremism or extremists, fringe elements of Islam and radicals. But of course the enemy is jihadist Islam which seeks global leadership and the destruction of Western civilization. Al-Qaida is simply an organization that fights on the enemy's side. As long as the enemy is left unaddressed, organizations like al-Qaida will continue to proliferate.

It isn't that US authorities do not acknowledge among themselves whom the enemy is. They do track Islamic leaders, and in general prosecute jihadists when they can build cases against them.

But their refusal to acknowledge the nature of the enemy has paralyzed their ability to confront and defeat threats as they arise. For instance, US Army Maj. Nidal Malik Hasan was not removed from service or investigated, despite his known support for jihad and his communication with leading jihadists. Rather, he was promoted and placed in a position where he was capable of massacring 12 soldiers and one civilian at Fort Hood, Texas.

Had the US not been in denial about the identity of its enemy, Hasan's victims would likely be alive today.
So too, the US's refusal to identify its enemy has made it impossible for US officials to understand and contend with the mounting threat from Turkey. Because the US refuses to recognize radical Islam as its enemy, it fails to connect Turkey's erratic and increasingly hostile behavior to the fact that the country is ruled by an Islamist government.
In the face of the rising political instability and uncertainty in the Arab world, the US's refusal to reckon with the fact that radical Islam is the enemy fighting it bodes ill for the future. Quite simply, America is willfully blinding itself to emerging dangers. These dangers are particularly acute in Egypt where the US has completely failed to recognize the threat the Muslim Brotherhood constitutes to its core regional interests and its national security...."
1 comments
Email ThisBlogThis!Share to TwitterShare to FacebookShare to Pinterest
Newer Posts Older Posts Home
Subscribe to: Posts (Atom)