Go therefore into liberal web sites and proclaim the truth 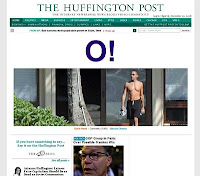 If you have a Facebook account, you can become a fan of the Huffington Post. Yes, you read it right – a fan of the most liberal web site in this political town. I did and as a fan, I posted links in their page or wall. Half of my posts stayed up; the others got taken down after someone from Planned Parenthood, I suspect, reported them. The thing is, this group has over 18,000 fans, so by the time my posting has been taken down, it received some exposure. And that is big because as Ralph Waldo Emerson wrote, “Sow a thought and you reap an action; sow an act and you reap a habit; sow a habit and you reap a character; sow a character and you reap a destiny.”

Then, I go in their postings and put in my 2 cents – usually the dissenting opinion but hey, it’s fun. I get challenged a lot because of my thoughts, but I respond respectfully and reasonably. And that’s where the payoff comes because people who were previously misinformed get to see the truth. Some don’t want it but others do. I don’t go in there saying, “the Pope says so”; instead, I take the Abp. Chaput and Fr. Barron approach of conversing with the world, defending truths and rights in the public square with reason. My greatest win so far was when a furious pro-abort raised the question of a cancerous uterus that has a living fetus. I presented St. Thomas Aquinas’ principle of double effect assuring her that it is moral to remove the cancerous uterus despite the collateral damage to the fetus. And that changed her tone. She doesn’t bust my chops whenever she sees my comments.

So far, the posts that I still have standing there are a graphic depiction of abortion, the latest “Right to Life” march in DC, the MSM biased reporting of it, a primer on the public option, Alveda King’s sharing about her abortion and a few more. These are powerful presentations that they allowed surprisingly.

Preaching to the choir and sharing within a nurturing community at my blog site and those of kindred spirits have its value and place. But I think there is a need to go beyond comfortable zones into the public square. There was news about the Pope encouraging priests and lay folks to blog and participate in the forum of ideas. I did and found it rewarding because, I saw their perspective as well and tended to demonize them less.

St. John Bosco said that he is willing to tip his berretta to the devil if the devil will allow him to snatch a soul from hell. The Huffington Post is an interesting place and definitely one where people can be snatched from falsity into truth.
0 comments
Email ThisBlogThis!Share to TwitterShare to FacebookShare to Pinterest


Check out the video posted at this link and watch a tiny sidewalk counsellor make a last ditch effort to save the unborn child. The comments are also inspiring and informative.


Patty in CT wrote "You have to wonder if at that moment, God is allowing the voices of those Guardian Angels (of both Mother and Child) to be given human form in those counselors for life. Can't you just see the Angelic figures pleading for the souls of those they have been sent to guide? Oh, it makes my heart weep!"

The escorts actually have a blog http://www.everysaturdaymorning.wordpress.com/ that gives prolifers an insight on how we are viewed by the other side.  As Sarah wrote, "It's like some kind of alternate universe to read ..."
0 comments
Email ThisBlogThis!Share to TwitterShare to FacebookShare to Pinterest
Newer Posts Older Posts Home
Subscribe to: Posts (Atom)