-- Stumbled is an understatement.
0 comments
Email ThisBlogThis!Share to TwitterShare to FacebookShare to Pinterest

Obama said, "They're bumps on the road." 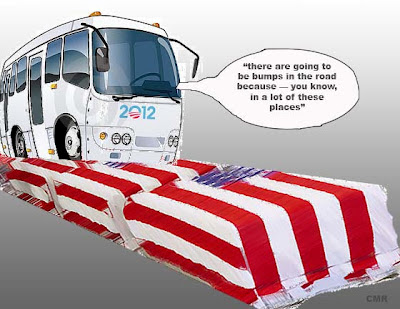 They're someone's dad, son, brother .... You get the idea right?

Excerpts
1. Michelle Obama is out race-baiting, referring to slavery, and attempting to motivate depressed black voters by stirring up race-hate and grievances.

2. Look at Barack Obama. Just look at him. This is not a man who looks like he thinks he’s winning.
3. Jim Messina is now claiming “polls don’t matter” and that Obama is secretly winning. When a Democrat starts saying polls don’t matter, they are losing big time. The polls the media picks and chooses are all rigged to benefit Democrats.

4. At the Emmys last night, a very loud contingent of people cheered Mitt Romney when asked if they’d vote for him. Consider the fact that the Emmys are held in Hollywood, and everyone there is a California resident.
5. Occupy Unmasked is the #1 political documentary on Amazon right now. It’s released on dvd tomorrow. People are clamoring to see it. They are clamoring to see The Hope and the Change, 2016: Obama’s America, and Atlas Shrugged: Part II as well. Is there anything similar on the Democrat side of things in terms of enthusiasm?
0 comments
Email ThisBlogThis!Share to TwitterShare to FacebookShare to Pinterest

Young voters wising up. Their ideals and trust shattered by Obama's lies and incompetence.