Commercialization of the liturgy 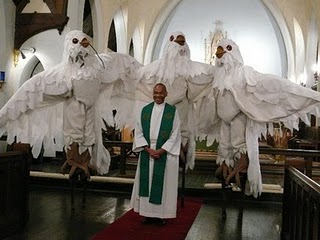 Even if KFC made a huge donation, please don't commercialize the liturgy.
H/T to Creative Minority Report
2 comments
Email ThisBlogThis!Share to TwitterShare to FacebookShare to Pinterest

Video: On-going apparitions of our Lady at Malta?

(If video fails, go to http://divine-ripples.blogspot.com/2010/09/video-on-going-apparitions-of-our-lady.html )

"Borġ in-Nadur apparitions are a series of perceived manifestations of the Virgin Mary by Angelik Caruana, a Birżebbuġa resident. Angelik Caruana has reported the reception of messages from Our Lady since December 2005. The apparitions began taking place at his house and then in January 2006 most of the apparitions began to occur at 'Borġ in-Nadur Hill' where, Our Lady asked him that she wanted to become known world-wide under the title of "Our Lady of Borġ in-Nadur". Angelik describes the apparition as communicating in Maltese, and members of the prayer group that has been formed circulate her messages through newsletters, emails and the official website.[1] Some of the people that gather on the 'Borġ in-Nadur Hill' have also videod Angelik Caruana during his vision and put the videos on YouTube. Angelik has described many messages dealing with the need for spiritual conversion and its relation to physical health.
The case has been reported to the bishop of Malta who has reported the case to the Vatican.[2] The Catholic Church has made no response to the case." from Wiki
Additional sources:
http://www.borgin-nadur.blogspot.com/
http://www.borgin-nadur.org/


Video description:
Angelik, is a visionary and stigmatist from a small island called Malta who since 21st April 2006 has been seeing the Mother of God to whom she gives her messages. Angelik also suffers the pain of the stigmata. This Video shows how everything started when a statue of the Immaculate Conception wept tears of blood in his house on 23rd January 2006.
0 comments
Email ThisBlogThis!Share to TwitterShare to FacebookShare to Pinterest

As Warner Todd Huston of Right Wing News writes:  "Democrat Gary McDowell is running to replace Bart Stupak (D, MI) in Michigan's First District and while he may be hoping he might get the votes of seniors coming to the end of their time here on this mortal coil, he sure seems reticent to give them the medical care they'll need to be around much longer after the election!  At a campaign appearance, McDowell agreed with those Obamacare supporters that think giving lifesaving medical care to seniors at end of life is a "resource" that needs to be rationed.  McDowell even makes a joke of the issue by saying that those that say end-of-life care should be rationed must be "from a safe district" because the "inconvenient truth" as he sees it is a tough pill to swallow. "

The callousness and total disregard of life is appalling and incredible.  But watch for yourself and see how low these people are.


This position is most unethical considering that the human person is more than matter and more than the economic values of his contributions or lack thereof. Furthermore, this position is most unChristian that considers God to be the author and owner of life that not even the person himself has the right to take his life - because it is really not his own. And if the person himself cannot end his life, the government has definitely no say in this matter.  Furthermore, in Christian spirituality, even suffering has value. So those with terminal illnesses contribute more to the spiritual upliftment of the human community by uniting their pain with the sacrifice of the incarnate Son of God.

BTW, Sarah Palin was not nuts when she warned us about "death panels";  she was telling the truth and the voices of darkness have been villifying and ridiculing her ever since.
0 comments
Email ThisBlogThis!Share to TwitterShare to FacebookShare to Pinterest
Newer Posts Older Posts Home
Subscribe to: Posts (Atom)