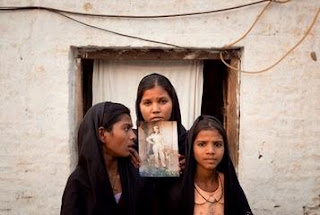 Slain Girl Being Called a Catholic Martyr in Pakistan Reportedly Refused to Convert to Islam
Source:  http://www.zenit.org/article-33940?l=english
KHUSHPUR, Pakistan, DEC. 6, 2011 (Zenit.org).- A young Pakistani woman, 18-year-old Mariah Manisha, (also reported as Amariah Masih) is being hailed as a martyr. A Catholic, she was kidnapped by a Muslim man.
The young woman from the village of Tehsil Samundari in Punjab province, was shot dead by 28-year-old Arif Gujjar, a Muslim.
Some reports say she was shot when she resisted an attempt to rape her; others say she was killed when she refused to convert to Islam so that the man could marry her.
Father Zafal Iqbal, a Catholic priest from Khushpur, where the young woman's family live, told the news agency Fides that "the girl resisted, she did not want to convert to Islam and she did not marry the man, who killed her for this. She is a martyr."
Father Khalid Rashid Asi, general vicar of the diocese of Faisalabad said: "It is very sad, Christians, often girls, are helpless victims."
According to Asia News the man responsible for the woman's death has been arrested by police. Guijar is the son of a wealthy landowner.
Manisha's funeral was celebrated by Father Zafal Iqbal, who told Asia News: "Wealthy and influential landowners often take aim at tthose who are marginalized and vulnerable, for their dirty interests."﻿
0 comments
Email ThisBlogThis!Share to TwitterShare to FacebookShare to Pinterest

Alarming Testimony about Islam in Human Rights Commission in the House

If video fails, click here or go to http://divine-ripples.blogspot.com/2011/12/alarming-testimony-about-islam-in-human.html

If video fails, click here or go to http://divine-ripples.blogspot.com/2011/12/hindu-women-raped-forced-to-convert-to.html