I create software for a living. In the olden days, programs are ordered to do stuff via commands. Those commands are defined in a lexicon. So, one cannot type anything and expect the program to do it. If it is not in the lexicon, the program will simply throw it in the garbage condition and stare back at you with a blinking cursor. Then you turn into a cursor yourself as you articulate expletives. ( If you do that over and over again, that become recursive - but I am getting too technical. So back to my point. ) If a direction or a concept is not in the dictionary or the lexicon, then it does not exist.

Because of this I am glad my analysis and programming work is related to the financial and not the defense industry. I have read that the analysts there cannot use terms that refer to Islamic fanaticism or Muslim extremism anymore. So, related concepts like jihad (holy war) and fatwa (teachings) are also out. When you purge these out then how can you do analysis of terrorism incidents or threats that are caused by these elements. Do you mask it with a generic label? It would be really difficult to do a bang up job without those words - if at all. It seems like those who gave those orders wanted it that way.

So that is the impact of removing terms from policies and reports. Now let's look at redefining terms like promises, commitments and the like. The Germans have a saying, "Ein Mann, ein Wort" literally "One Man, one word" meaning "A Promise is a promise." And if that is not happening, then there is no integrity or oneness. As the Indians would say, "You speak with a forked tongue." When that applies to Obama, it is no longer surprising. What is appalling though is the lack of remorse over his lies.

This morning, Obama said he would not ask the debt commission to abide by his campaign promise when it produces its recommendations. In his words, "Of course this means that all of you, our friends in the media, will ask me and others once a week, or once a day, about what we are willing to rule out or rule in when it comes to the recommendations of the commission. That’s an old Washington game…so I wanted to deliver this message today: we’re not playing that game. I’m not gonna say what’s in, I’m not gonna say what’s out".

So, his promises to the voters have no binding effect when the rubber meets the road. And holding him accountable to those is a game. I wonder how Michelle feels about his wedding vow now. And we know that the promissory note that he gave Bart Stupak to preclude tax dollars from funding abortion is toilet paper. We have a president who cannot be taken at his word anymore. That's why I change the channel whenever he comes up, though I sometimes listen to sense how crap sounds. But the serious part is, this man is running the country. All I can do is vote him out later. 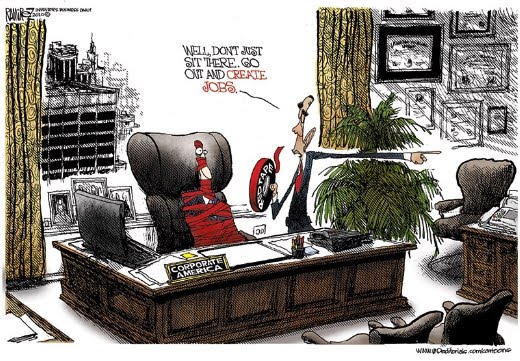 "Red tape isn’t the only thing hamstringing American business. The Obama administration has sent plenty of price signals on taxes and burdensome regulation that will keep investors and businesses from betting on expansion. As long as the administration pursues those policies, it will keep the engine of American economic growth bound and gagged." (1)

What's worse is that we should have recovered by now.  Based on business cycles, jobs return around a year at the latest.  It's 2 years and half and there is still 10% unemployment and more  underemployment.  What extended the recession is the government intervention that intended to curb it.  Could an administration favoring businesses enacted better policies?  You bectha.

1.    http://hotair.com/archives/2010/04/27/ramirez-on-job-creation/
0 comments
Email ThisBlogThis!Share to TwitterShare to FacebookShare to Pinterest

Here's a recent rally for taxes.  And if you watch the interviews, you'll see that the participants are members of SEIU and bused in.  But why would anyone want that now?  Well, first of all it is not going to affect this group so, it is actually to raise taxes on the other guy.  Secondly, it is to allow the government to continue spending.  I just saw Obama on the TV talking about addressing debt because if it doesn't then it could erode the country’s ability to educate its children, care for the elderly or mount a robust national defense.  So either stop spending or fleece the people more.

But the Obama does not want to cut spending.  If he did then he wouldn’t be pushing massive expansions of federal government like ObamaCare and the upcoming cap-and-trade bill. And the SEIU wouldn't want that either otherwise it's chief, Andy Stern,  wouldn’t be sitting on that panel to find ways to reduce the bureaucracies that pour dues into his union’s pockets, especially now that his pension and retirement count on boosting membership.

And so, this is why we have people who want to get more of that gravy train rolling at the tax payers expense of course.