Donate to help end wasteful deficit spending at www.cagw.org. This new ad is part of an ongoing communications program in CAGW's decades-long fight against wasteful government spending, increased taxes, out-of-control deficit spending, and a crippling national debt that threatens the future and survival of our country.
0 comments
Email ThisBlogThis!Share to TwitterShare to FacebookShare to Pinterest

A federal judge declined to force the secretary of state to reactivate approximately 6,000 new voters whose registrations were canceled under Colorado’s 20-day rule.
In a decision issued Monday, Senior U.S. District Judge John L. Kane denied a motion for a preliminary injunction that was requested by several labor and voting-rights groups.
When a new voter registers in Colorado, the secretary of state mails a nonforwardable notice of disposition that the voter’s registration has been received. If the notice comes back undeliverable in the mail, then clerks deem the voter’s registration inactive within 20 days.
Melody Mirbaba, an assistant attorney general, argued that the 20-day rule is designed to stop voter fraud and duplicate registrations.
James Finberg, an attorney representing voting and labor groups, said voters are harmed because sometimes the voter cards are returned through no fault of their own.
He said some voters have filled out their address incorrectly on forms; clerks sometimes make errors when inputting the new data; and postal workers also make mistakes in delivering the voter cards.
But Mirbaba argued that inactive voters can still show up at the polls and vote on a provisional ballot until their addresses can be verified…
…The motion for the preliminary injunction is one of several federal challenges regarding purged voters filed against the secretary of state by Common Cause of Colorado, Mi Familia Vota Education Fund and the Service Employees International Union.

Truth about Muslims can't be told in US public radio - without punishment.

JUAN WILLIAMS: I Was Fired for Telling the Truth
Yesterday NPR fired me for telling the truth. The truth is that I worry when I am getting on an airplane and see people dressed in garb that identifies them first and foremost as Muslims.
This is not a bigoted statement. It is a statement of my feelings, my fears after the terrorist attacks of 9/11 by radical Muslims. In a debate with Bill O’Reilly I revealed my fears to set up the case for not making rash judgments about people of any faith. I pointed out that the Atlanta Olympic bomber -- as well as Timothy McVeigh and the people who protest against gay rights at military funerals -- are Christians but we journalists don’t identify them by their religion.

And I made it clear that all Americans have to be careful not to let fears lead to the violation of anyone’s constitutional rights, be it to build a mosque, carry the Koran or drive a New York cab without the fear of having your throat slashed. Bill and I argued after I said he has to take care in the way he talks about the 9/11 attacks so as not to provoke bigotry.

This was an honest, sensitive debate hosted by O’Reilly. At the start of the debate Bill invited me, challenged me to tell him where he was wrong for stating the fact that “Muslims killed us there,” in the 9/11 attacks. He made that initial statement on the ABC program, "The View," which caused some of the co-hosts to walk off the set. They did not return until O’Reilly apologized for not being clear that he did not mean the country was attacked by all Muslims but by extremist radical Muslims.

I took Bill’s challenge and began by saying that political correctness can cause people to become so paralyzed that they don’t deal with reality. And the fact is that it was a group of Muslims who attacked the U.S. I added that radicalism has continued to pose a threat to the United States and much of the world. That threat was expressed in court last week by the unsuccessful Times Square bomber who bragged that he was just one of the first engaged in a “Muslim War” against the United States. -- There is no doubt that there's a real war and people are trying to kill us.

The words that got him in trouble.  If video fails, go to http://divine-ripples.blogspot.com/2010/10/have-you-made-that-call-for-npr.html

I wonder if the people can still make a difference and turn things back to regain that freedom of speech. 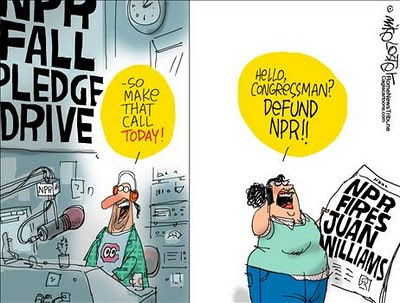 by Mike Lester
0 comments
Email ThisBlogThis!Share to TwitterShare to FacebookShare to Pinterest

"The Yuma Sun is reporting that two organizations — Mi Familia Vota and One Vote Arizona — submitted more than 3000 voter registrations in Yuma County, and more than 20,000 voters statewide. Even more, they have signed up 43,000 people statewide for the permanent early voter list.

What they didn’t tell you is that voter fraud on a massive scale could be taking place, ostensibly to help Raul Grijalva keep the congressional seat he holds by stealing the election.

Here’s what the article doesn’t tell you, by a source in the Yuma County Recorder’s Office:

Almost all of the registrations were for the Democratic Party, a statistical improbability at best.

Today, these same 3000 newly registered voters — as a group — had papers dropped off at the Yuma Recorder’s office requesting to be signed up for the permanent early voters list… which means the ballots will be mailed early, with no accountability.

The Yuma Recorder’s office is checking the voter registration forms and have found that already more than 65% of them are invalid due to the registrant not being a citizen, wrong/invalid address, false signature, etc. Mi Familia Vota is a wholly-owned SEIU sub-organization. It is just as “non-partisan” as ACORN was before documented fraudulent behaviors finally killed it. "  from Publius Pundit
0 comments
Email ThisBlogThis!Share to TwitterShare to FacebookShare to Pinterest
Newer Posts Older Posts Home
Subscribe to: Posts (Atom)