The bold statement is what Democrats say followed by the English translation.


Our opponents refuse to compromise on this issue: The Republicans refuse to do everything we want.
That charge is outrageous: That charge is true but you shouldn't have brought it up in public.

Honey I need a little quiet time right now: I got drunk and drove a car containing a campaign worker I was boffing off a bridge. She's dead, the car is at the bottom of a tidal pool, and I have influential relatives to call and people to bribe before I call the cops so can you cut me a little slack?
Every vote must be counted in this election: Except for the military vote because they tend to go Republican.
The era of big government is over: But the era of Godzilla sized government is just beginning if I can help it.
I did not have sexual relations with that woman: We had sex on every piece of furniture in the White House.
I think we need to take a closer look at what's going on in this industry: I think we need to strangle this industry with red tape and new regulations until it's so screwed up that we have to take over.
We must address the root causes of this problem: We must not do anything to effectively address this problem. Instead we must raise taxes and pour dump trucks worth of money into whatever unrelated issue we have decided is the cause of the problem.
No justice, no peace: Give us money and we'll find someone else to bother.
He's in the pocket of big oil: He was once seen filling up the tank of his car with gas.
I didn't inhale: I was so stoned that I thought I could fly.
I have no information about where my former intern is: That's technically true. I told the guys I hired to kill her that I didn't want to know any details.
Source: http://rightwingnews.com/humor/democrats.php
0 comments
Email ThisBlogThis!Share to TwitterShare to FacebookShare to Pinterest

Video: Dem. Congressman freaks out when lie was challenged.

It doesn’t.  On the contrary, it states the opposite as CBO Director Doug Elmendorf actually wrote about Obamacare this May: "The central challenge is straightforward and stark: The rising costs of health care will put tremendous pressure on the federal budget during the next few decades and beyond.  In CBO’s judgment, the health legislation enacted earlier this year does not substantially diminish that pressure. In fact, CBO estimated that the health legislation will increase the federal budgetary commitment to health care (which CBO defines as the sum of net federal outlays for health programs and tax preferences for health care) by nearly $400 billion during the 2010-2019 period."
If video fails, go to http://divine-ripples.blogspot.com/2010/07/video-dem-congressman-freaks-out-when.html  Watch for my follow-up post on Democratspeak.
0 comments
Email ThisBlogThis!Share to TwitterShare to FacebookShare to Pinterest

Video clip of a town hall meeting in the 27th Congressional district of California, represented by Democrat Brad Sherman.  Congressman Sherman claims not to have heard of the New Black Panther case or its dismissal by the Justice Department.  And the crowd goes wild.  If video fails, go to http://divine-ripples.blogspot.com/2010/07/video-thiller-dem-congressman-denies.html

Repealing Obamacare is like putting toothpaste back in the tube.  It's messy but it must be done to kept the situation from getting worse.  The next steps involve reviving the market forces that will bring back the efficiencies.  If video fails go to http://divine-ripples.blogspot.com/2010/07/video-restoring-market-forces-damaged.html

Video description: Government programs and intervention were making a mess of the healthcare system, even before Obamacare was enacted. Repealing Obamacare is a good idea and will prevent a bad situation from becoming worse. This CF&P Foundation video explains, however, that repeal is just the first step if we want to genuinely restore a free market and create an efficient and cost-effective healthcare system. http://www.freedomandprosperity.org/
0 comments
Email ThisBlogThis!Share to TwitterShare to FacebookShare to Pinterest 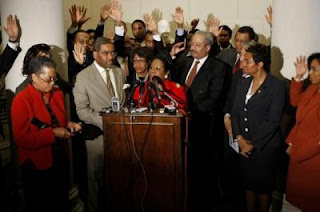 This is them - the racially segregated NAACP.  They asked the Tea Party to denounce the racist elements in their organization. 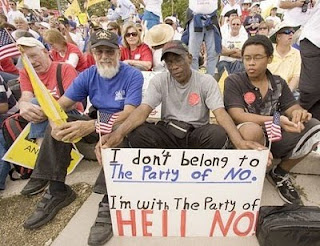 This is us - the racially integrated Tea Party.