Why I was at a candle light vigil for Iranians

I was there last night because, I am convinced that if everyone in the world would stand for the oppressed then no power can resist that pressure. (If you care to find me, I am at the end at 2:01 - 2:04.)
Today it is the Iranians, yesterday - the Rwandans, Albanians in Kosovo, people of Sierra Leone, decades back the Salvadorans, the Jews, and the list goes on. Who will it be tomorrow?
In the video, the clothes are mostly black for those mourning the loss of their loved ones or green for the political party that opposes the current regime. So, there's just a couple of hundred folks tops. Why is there little show of solidarity for the Iranian people from others? There was more turnout for Michael Jackson.
I think people need to go beyond the stances of their governments and see their brothers and sisters even in the so-called rogue states. And it is being done by groups like Amnesty International and Doctors Without Borders. What bothers me is that I have heard nothing from my Church about this. People are dying and being tortured abroad and there's not a word about how to address that situation. From a dogmatic standpoint, these Iranians even if they're Muslims and secularists are related to, if not part of the People of God. Review the Dogmatic Constitution of the Church "Lumen Gentium" and "Gaudium et Spes".
We'll soon be hearing less and less from Iran because, the regime is tightening up the information leakage. It does not mean that things are stabilizing. Even here, there is caution if not fear. I took pictures and was approached by someone to have his picture deleted because, he was going back to Iran sometime later.
At the end, people are formed by those who love them and those who refuse to love them. The Iranians need us now.
0 comments
Email ThisBlogThis!Share to TwitterShare to FacebookShare to Pinterest

My model in following Jesus 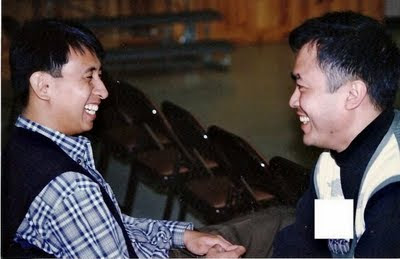 This week, my family is away with my in-laws. So, I use the quiet time for a spiritual retreat by watching the talks of Bo Sanchez, a Catholic lay minister.
And the wonderful thing is that I get him and his message. I think God uses him effectively because he responds to the leadings of God without any consideration for himself. When he was a boy, he imitated St. Francis by giving his clothes away and tried to shelter a homeless person in his room. Though his parents did not allow the stranger to live with them, Bo continued to follow these inspirations. He became a lay evangelist. Until now, after 30 years, his ministries continue to thrive.
In his talk found at http://preacherinbluejeans.com/videos/20090722/jul-22-2009-.html he confessed his repeated failures in purity. It is not like he was caught in the act. No one would have suspected that he was enslaved by lust and porn. But he talked about it most probably to encourage his audience. And it works me because I've always wondered about the lives of saints where there is no mention of sins after their conversion. Perhaps the hagiographers edited those out to edify the readers. But I think it only discourages because most people who try to become holy probably stumble every now and then. So what Bo did is encouraging. People will not give up in their efforts because, we'll look at Bo who rises after a fall and continues to walk towards the Lord.
Moreover, he discovered the way to overcome this addiction after numerous trials and errors. I've listed the links to his blog entries about "How To Get Rid Of Bad Habits Now!"
http://bosanchez.ph/discover-what-you-really-need/
http://bosanchez.ph/119/
http://bosanchez.ph/love-the-sinner-and-the-saint-within/
http://bosanchez.ph/shape-your-outer-world-before-it-shapes-you/
http://bosanchez.ph/redefine-yourself/
http://bosanchez.ph/get-rid-of-toxic-faith/
http://bosanchez.ph/take-charge/
http://bosanchez.ph/allow-love-to-heal-you/
Needless to say that this is not an endorsement to sin. If you are pure, all the saints will counsel that you guard that purity like a most precious treasure. It will be easier to keep your virtue if you've kept your innocence than the contrary.
0 comments
Email ThisBlogThis!Share to TwitterShare to FacebookShare to Pinterest

Buildings of darkness and of light

I recently accompanied my wife to a conference. We stayed at a hotel just a building away from the convention center but, it was also just across a strip club. The name itself was appropriate for the idolatry of the flesh. 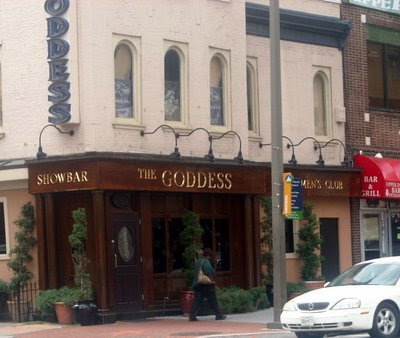 During the conferences, I would drop the older kids to a play center and stroll around with my toddler. I noticed a steeple with a golden cross a few blocks away. It became a source of comfort, a ray of hope that God has not abandoned us. 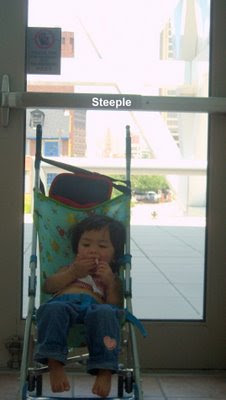 So, we headed towards it and saw this sign along the way. FYI, when I went out to buy milk at the neighborhood convenience store the night before, I made a wrong turn and ended up where there was a drug bust and later a possible drug sale. This wasn't that location but as you can see, it is probably just as notorious. 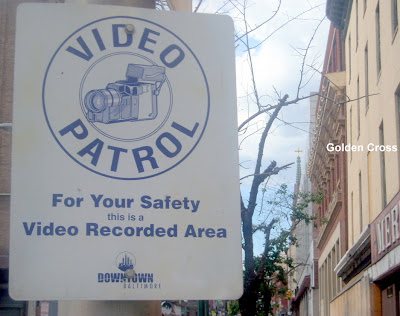 But I walked on and saw young folks. My former confreres would have thought St. John Bosco's motto, "Give me souls." Unfortunately, the youth in the US and possibly elsewhere have been victims of church folks who thought, "Give me bodies." 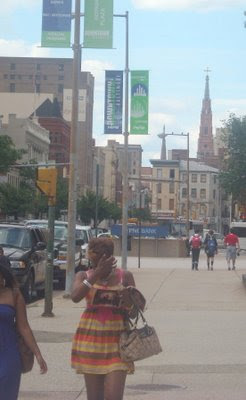 I reached the church but it was closed for restoration - quite an apt metaphor for the Catholic faith in the US. 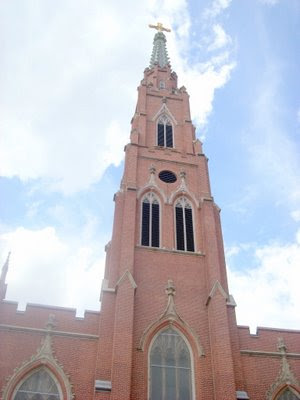 Yet the Lord promised that the gates of hell will never prevail against the Church. So, it will neither be destroyed from within nor from without. Let's just pick up the pieces and rebuild it brick by brick.

It's 2 a.m. and I felt the need to get up and publish this. Perhaps, someone needs to read it.
First of all, I pray that this will never happen to me and I will do everything in my power together with the grace of God to make my marriage persevere in holiness and love. The reason I'm on this topic is perhaps because of what I saw last week. The hotel where we stayed while attending a professional conference was just across a "gentleman's club". I know that patronizing that is evil but others consider it a harmless pastime. (I did not go, BTW.) So, I say purity or chastity is not just for virgins or celibates. Married folks have to be pure not only in actions, but also in thoughts and words. Furthermore, the consequences of impurity can lead to infidelity then divorce. Since the Catholic Church does not accept or recognize divorce, people seek annulments to break out of their marriage vows.
But an annulment is not a divorce. It is stating that there was no marriage to begin with and that can be caused by either a lack of freedom as when someone was forced by shotgun or a lack of knowledge e.g. ignorance that marriage was meant for procreation. Bottom line, it is not a Catholic divorce because there is no divorce in the Catholic Church. If the couple was freely married and knew what it entailed, then that is an indissolvable union. Jesus taught, "What God has united, let no man separate." And if there are problems, then the grace of God is sufficient for the couple to surmount it and remain faithful to their promises to God. Problems are developmental events that can help the couple grow in their commitment to God and each other. I've heard how others have betrayed their spouses. And while this may be horrendous and excruciatingly painful, it is not a justification to break one's vows. Two wrongs don't make a right.
What I don't get is how easily the Church dissolves these bonds. St. Thomas More was beheaded for not yielding to condone the king's divorce; yet, the Church grants annulments like pancakes. I find it hard to believe that all those marriages were defective to begin with. Is the Church compromising the holiness of this sacrament and succumbing to expediency?
1 comments
Email ThisBlogThis!Share to TwitterShare to FacebookShare to Pinterest
Newer Posts Older Posts Home
Subscribe to: Posts (Atom)