FIRST PLACE: INTERNATIONAL PICTURE OF THE YEAR! by Dondra Murphy 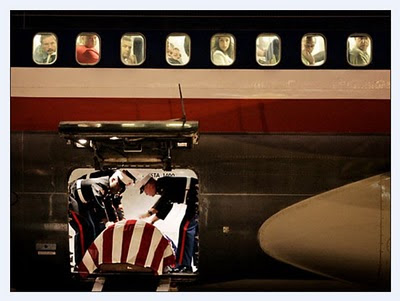 
When 2nd Lt. James Cathey's body arrived at the  Reno Airport, Marines climbed into the cargo hold of the plane and draped the flag over his casket as passengers watched the  family gather on the tarmac.
During the arrival of another Marine's casket last year at Denver International Airport , Major Steve Beck described the scene as so powerful:
'See the people in the windows? They sat right there in the plane, watching those Marines. You gotta wonder what's going through their minds, knowing that they're on the  plane that brought him home,' he said 'They will remember being on  that plane for the rest of their lives. They're going to remember bringing that Marine home.
And so should we all.....
0 comments
Email ThisBlogThis!Share to TwitterShare to FacebookShare to Pinterest

If video fails, click here or go to http://divine-ripples.blogspot.com/2011/03/more-women-will-die-if-planned.html

More Women WILL DIE if Planned Parenthood is Funded.  Mostly poor and black.

After working for Planned Parenthood for eight years, Abby knows the truth about their abortion focused business model. Learn the truth at http://www.exposeplannedparenthood.com/