If video fails, click here or go to:  http://divine-ripples.blogspot.com/2011/01/media-tries-to-demoralize-fight-back.html

Do not fall for it.
Holding the Republican House to its commitments is one thing; falling for Operation Demoralize is something else.

If you think that the mainstream media is not still 100% in the tank for Obama, think again.

Let's continue taking back our country. Don't get stymied by their gimmicks and lies. We're the good guys here and we have a big job to do.

Is it OK to be uncivil if someone pees on your leg and tells you it's rain? 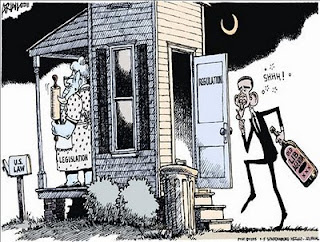 It's about the Democrats in the Senate and the White House who keep disrespecting the will of the people. We voted them out primarily to repeal Obamacare. I think they know what the people want but decide to pursue their own agenda instead. So, they're saying that even if the repeal passes the House, they're not even taking it up in the Senate - just because it is going against their law. Aren't they supposed to serve the people. In this case, they're blocking the people's will. Then they're telling us to calm down, to be sane, to not use inflamatory rhetoric. And some people believe them. I am going to be a tad crude here but, when someone pees on my leg and tells me it's rain then I reserve the right to assert my human dignity - whatever is left of it.
I think Conservatives are too rational, too religious. What I mean is that the Lord did not redeem us with His Innocent Blood so that some Liberal jerk can mess with us. And if we let him do it, then we are not being our brother's keeper as we let him sin, become unjust, corrupt and negligent.
Conservatives need to storm the Capitol and demand that the Senators vote the people's will. Playing party politics is not acceptable. We need to get mad because they're robbing us blind and making a mockery of the Democratic process.
Cartoon by Robert Ariail
0 comments
Email ThisBlogThis!Share to TwitterShare to FacebookShare to Pinterest

Escort the repeal to the Senate

Here in DC, WTOP keeps reporting on the vote to repeal Obamacare as futile, a show, a promise to be fulfilled but not going anywhere because Senate will not pass it.  Why would Senate continue to defy the people who have spoken loudly and clearly?  Is there anything we can do to dissuade them from this disservice to the nation?  Can we escort the bill to them like these bikers who rode with the boy who wanted to fly the flag in his bike?  If video fails, go to http://divine-ripples.blogspot.com/2011/01/escort-repeal-to-senate.html