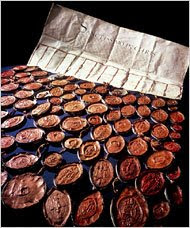 Here is a letter to Pope Clement VII dated July 13, 1530 that asks for the annulment of Henry’s marriage to Catherine of Aragon and includes the seals of dozens of bishops of England who concurred with the request. These bishops later supported the separation of the Church of England from Rome.

Last month, more than a hundred US bishops gave their tacit consent as they refrained from criticizing the honor given by Notre Dame to the Obama, a prominent supporter of abortion laws However, there were seventy or more who publicly protested this scandal.

Last week, the report of the Commission to Inquire into Child Abuse, published in Dublin last week, reported some 8,000 religious people were involved in the maltreatment of 35,000 children.

Yesterday, during the opening speech of the Diocesan Ecclesial Conference in the Basilica of St. John Lateran in Rome, the Pope pointed out that the laity must progress beyond simply collaborating with the clergy to a greater share in the responsibility of the Church's activity which includes evangelization. Cf. http://www.youtube.com/watch?v=gPSNbu9lRg4
If you read the older posts, this is already being done in various ways e.g. influencing Abp. Wuerl to enforce canon 915 etc... Now, we have the Pope's blessings and mandate to continue to build the church with the good clerics and without the pedophiles and politicians.
0 comments
Email ThisBlogThis!Share to TwitterShare to FacebookShare to Pinterest
Newer Posts Older Posts Home
Subscribe to: Posts (Atom)