Here is a YouTube link: http://www.youtube.com/watch?v=l1I6wlobutc
and the description is as follows:
This is footage of the miraculous appearance of the Holy Fire, Saturday April 26, 2008, in Jerusalem at the Orthodox Church of the Holy Sepulchre.
The miraculous appearance of the Holy Fire occurs every year on Holy Saturday in the Church of the Holy Sepulchre in the Old City of Jerusalem. Holy Saturday is the day before Orthodox Pascha, the celebration of the Resurrection of Jesus Christ.
The Holy Fire appears when the Patriarch of Jerusalem enters a small marble structure built over Christ’s actual, historic tomb. He enters inside, closes the door, and two large candles are miraculously lit as he is uttering prayers. When he exits the tomb he uses his lit candles to light the candles of pilgrims, who in turn light other pilgrims’ candles.
The Holy Fire doesn’t burn, as one can witness when the pious pilgrim in the video (27 second mark) moves his flame back and forth over his face and neck. The Holy Fire is later transported on chartered flights to Athens, Russia, Bulgaria and other Orthodox countries.
For more info:  http://www.holyfire.org/eng/
0 comments
Email ThisBlogThis!Share to TwitterShare to FacebookShare to Pinterest 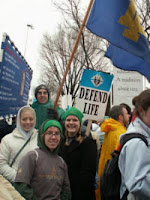 Fr. Jenkins from Notre Dame University has invited a pro-abortion government official to give the commencement address and receive an honorary degree. That has caused quite a stir in the Catholic community that 30 bishops have publicly requested that he rescind the invitation. Despite that, Fr. Jenkins remains adamant.

And there lies the tragedy because it shows the disconnect between faith and life. A tree is known by its fruit. You don't get hemlock from an apple tree.  Or agere sequitur esse  - activity proceeds from essence or being.

There lies the root of the problem - an identity crises. Are they a university for Catholics or a Catholic university?

In the past, universities were only for Protestants;  so, colleges were put up for Catholics.  So, they could be a generic college with that history and are now almost Catholic in name only as written up in 'The Idea of a Catholic University' ( Land'o'Lakes Conference, 1967 )

The only Catholic trait there is from the statement " Distinctively, then, the Catholic university must be an institution, a community of learners or a community of scholars, in which Catholicism is perceptibly present and effectively operative."

Or the university can be the educational arm of the Church preparing leaders to permeate the world with the spirit of God as defined the apostolic constitution on Catholic Universities (Rome, 1990) by the late Pope John Paul II.  http://www.vatican.va/holy_father/john_paul_ii/apost_constitutions/documents/hf_jp-ii_apc_15081990_ex-corde-ecclesiae_en.html

The essential characteristics quoted below leaves no doubt on the identity and vision of a Catholic university.

13. Since the objective of a Catholic University is to assure in an institutional manner a Christian presence in the university world confronting the great problems of society and culture(16), every Catholic University, as Catholic, must have the following essential characteristics:

"1. a Christian inspiration not only of individuals but of the university community as such;

2. a continuing reflection in the light of the Catholic faith upon the growing treasury of human knowledge, to which it seeks to contribute by its own research;

3. fidelity to the Christian message as it comes to us through the Church;

4. an institutional commitment to the service of the people of God and of the human family in their pilgrimage to the transcendent goal which gives meaning to life"(17).

There seems to be a little of both visions as shown by some of the students, teachers, staff and alumni who demonstrated last week against the invitation.  So there’s hope in reforming it’s vision and mission in the long-term and doing some damage control this May.

We plan to join the students there as they stand for all these values as personified  by Our Lady – Notre Dame.