Primer on Socialism from WikiPedia  http://en.wikipedia.org/wiki/Socialism
Excerpts:
Socialism is not a concrete philosophy of fixed doctrine and programme; its branches advocate a degree of social interventionism and economic rationalisation (usually in the form of economic planning), but sometimes oppose each other. A dividing feature of the socialist movement is the split between reformists and revolutionaries on how a socialist economy should be established. Some socialists advocate complete nationalisation of the means of production, distribution, and exchange; others advocate state control of capital within the framework of a market economy.

Socialists inspired by the Soviet model of economic development have advocated the creation of centrally planned economies directed by a state that owns all the means of production. Others, including Yugoslavian, Hungarian, German and Chinese communist governments in the 1970s and 1980s, have instituted various forms of market socialism, combining co-operative and state ownership models with the free market exchange and free price system (but not free prices for the means of production).[10] Modern social democrats propose selective nationalisation of key national industries in mixed economies, while maintaining private ownership of capital and private business enterprise. (In the 19th and early 20th century the term was used to refer to those who wanted to completely replace capitalism with socialism through reform.) Modern social democrats also promote tax-funded welfare programs and regulation of markets; many, particularly in European welfare states, refer to themselves as socialists, despite holding pro-capitalist viewpoints, thus adding ambiguity to the meaning of the term "socialist".
1 comments
Email ThisBlogThis!Share to TwitterShare to FacebookShare to Pinterest 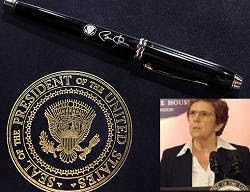 Washington D.C., Mar 24, 2010 / 12:39 am (CNA).- Sister Carol Keehan, President of the Catholic Health Association, has been awarded with one of the 21 pens used by President Barack Obama on Tuesday to sign the health care bill.

It is a presidential tradition to give out the pens used to sign the bill to lawmakers and proponents who have played a key role in any piece of major legislation.

“I have got to use every pen, so it’s going to take a long time,” said President Obama during the ceremony held at the White House's East Room.

Sister Keehan, who strongly supported the controversial health care bill despite the opposition of the U.S. bishops, was joined in receiving presidential pens by some of the most strongly pro-abortion members of the Congress... more at http://www.catholicnewsagency.com/news/sr._kehaan_receives_presidential_pen_for_supporting_health_care_against_bishops_decision/?utm_source=feedburner&utm_medium=feed&utm_campaign=Feed%3A+catholicnewsagency%2Fdailynews+%28CNA+Daily+News%29

The bishops condemn this law as "unethical and deceptive".  As Archbishop Chaput writes, "First, the bill passed by the House on March 21 is a failure of decent lawmaking. It has not been “fixed.” It remains unethical and defective on all of the issues pressed by the U.S. bishops and prolife groups for the past seven months....


Second, the Executive Order promised by the White House to ban the use of federal funds for abortion does not solve the many problems with the bill, which is why the bishops did not -- and still do not – see it as a real solution. Executive Orders can be rescinded or reinterpreted at any time. ...

Third, the combination of pressure and disinformation used to break the prolife witness on this bill among Democratic members of Congress – despite the strong resistance to this legislation that continues among American voters – should put an end to any talk by Washington leaders about serving the common good or seeking common ground...."

In reference to Sister Carol Keehan and the Catholic Health Association he writes, "Fourth, self-described “Catholic” groups have done a serious disservice to justice, to the Church, and to the ethical needs of the American people by undercutting the leadership and witness of their own bishops. For groups like Catholics United, this is unsurprising. In their effect, if not in formal intent, such groups exist to advance the interests of a particular political spectrum. Nor is it newsworthy from an organization like Network, which – whatever the nature of its good work -- has rarely shown much enthusiasm for a definition of “social justice” that includes the rights of the unborn child.


But the actions of the Catholic Health Association (CHA) in providing a deliberate public counter-message to the bishops were both surprising and profoundly disappointing; and also genuinely damaging. In the crucial final days of debate on health-care legislation, CHA lobbyists worked directly against the efforts of the American bishops in their approach to members of Congress. The bad law we now likely face, we owe in part to the efforts of the Catholic Health Association and similar “Catholic” organizations."  More at http://www.archden.org/index.cfm/ID/3631

The Church in America is continously assailed by the enemy from within.  As disobedient and disloyal nuns continue to scandalize and mislead the faithful, the majority of bishops and priests remain silent to the point that others accuse them of collaboraton by tacitly supporting these Socialists.  And if their recents actions are any indication, they will continue to support Obama, his party of death and the culture of corruption this coming election unless the lay people do something.  The answer is in our hands.
1 comments
Email ThisBlogThis!Share to TwitterShare to FacebookShare to Pinterest
Newer Posts Older Posts Home
Subscribe to: Posts (Atom)