People have a choice, to do the right thing now for the love of God or cower under the laws of Islam later for fear of torture, amputation or death.

On the side, I wonder if this is the reason why the pro-Muslim administration is promoting abortion.

If video fails, go to: http://divine-ripples.blogspot.com/2010/07/video-islamic-dominance-resulting-from.html
0 comments
Email ThisBlogThis!Share to TwitterShare to FacebookShare to Pinterest

The false value of inefficiency. 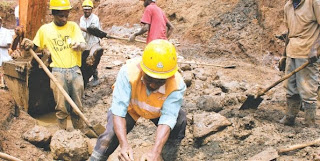 Would you raise capital by getting a second mortgage to start a business; then, run it in such an inefficient way that it is doomed to fail within a few years? It sounds absurd and ludicrous but government officials think it’s a good model as long as the enterprise creates jobs – even for a short time.

It is like a road project that purposely chooses a manual intensive operation instead of using heavy equipment. Instead of steam rollers, people pound the ground with stumps. There are no tractors, just shovels and picks. So, the roads costs 3 times as much, takes 3 times longer to finish and is 3 times weaker than one built with machines. On the other hand, it employed 10 times more people. And that is the benefit of waste and inefficiency.

That is how the stimulus money ran out without jump starting the economy. Instead, that money could have been used to encourage private businesses; those plan to stay around by being profitable. Businesses run operations tightly and watch every penny so there may not be much employment immediately. However, as the business thrives, it expands and as it does, continue to hire more. But it takes time.

For those who care about a lasting recovery, then this is the way to go. It may not show quick and dramatic results; but, the results will be real. For those who care about appearances and popular support, then putting the stimulus money is wasteful products will achieve their aim. By the time elections come around, the people who were employed temporarily would reelect those officials to come up with more inefficient projects. But sooner or later, the country will run out of money just like an entrepreneur who has to close shop and lose their home and possessions used as collateral. But that will be down the road many years from now and the politicians who would destroy this country will be long retired on fat pensions and benefits. I guess they don’t care about their children and grandchildren.

When women fail - in Judaism, Christianity and Islam

Judaism:  the prophet Hosea was directed to forgive his adulterous wife. 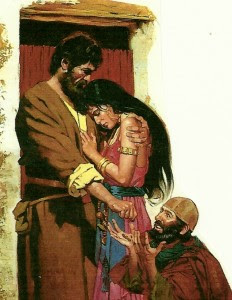 "Hosea receives an unusual instruction from God: Go, take a harlot wife and harlot’s children, for the land gives itself to harlotry, turning away from the LORD. So he went and took Gomer, the daughter of Diblaim (Hosea 1:2)   At some point, though the text does not specify when or under what circumstances, Hosea’s wife Gomer, leaves him for a lover and enters into an adulterous relationship with him. We can only imagine Hosea’s pain and likely anger at this rejection. The text remains silent as to Hosea, but as we shall see, God’s reaction is well attested.  After some unspecified period of time God instructs Hosea: Give your love to a woman beloved of a paramour, an adulteress; Even as the LORD loves the people of Israel, though they turn to other gods and are fond of raisin cakes (Hosea 3:1) Now, while the quoted text is not clear to specify that this is the same woman he is to love, the overall context of chapters 1-3 of Hosea demand that this is the same unfaithful wife, Gomer. God tells Hosea to redeem, to buy back Gomer and re-establish his marital bonds with her. Hosea has to pay a rather hefty price indeed to purchase her back from her paramour: So I bought her for fifteen pieces of silver and a homer and a lethech of barley. (Hosea 3:2) The willingness of her paramour to “sell her back” indicates quite poetically that the apparent love of the world and all false lovers, is not a real love at all. It is for sale to the highest bidder. Prior to restoring her to any intimacy a period of purification and testing will be necessary: Then I said to her: “Many days you shall wait for me; you shall not play the harlot Or belong to any man; I in turn will wait for you.” (Hosea 3:3) "
Hosea commentary source Msgr. Pope

Christianity:  how Jesus treated the woman caught in adultery

Islam:  how Muslims kicked and stoned to death a woman who forgot to feed the goat.
(Warning : disturbing & grim images containing graphic depiction of torture and execution.)
http://www.facebook.com/?ref=logo#!/video/video.php?v=133559440007177&ref=mf