I am burning 2 pages: Muslims Bomb a Catholic Church in Philippines, Two Killed

Two people were killed and eight wounded when an bomb exploded outside a canteen near a Catholic Church in the southern Philippines, police said Sunday.
The blast occurred Saturday in Isabela City in Basilan province, 900 kilometres south of Manila, according to regional commander Felicisimo Khu. Khu said the explosion caused a fire in the canteen.
Basilan is one of the strongholds of al-Qaeda-linked Muslim militants accused of some of the worst terrorist attacks in the Philippines and high-profile kidnappings involving foreign hostages. 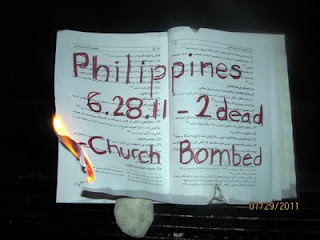