The Pennsylvania legislature today gave the final okay to a bill that stops taxpayer funding of abortions. The Pennsylvania Senate vote send the bill to Governor Corbett, who is expected to sign it into law.
HB 818 would ensure that Pennsylvania opts out of abortion funding under the health insurance exchange created by the federal health care law, also known as Obamacare.

“In a major victory for Pennsylvania taxpayers, the Pennsylvania Senate on Wednesday approved a ban on tax funding of abortions in PA under the health insurance exchange created by the federal health care law (which many know as Obamacare),” Pennsylvania Pro-Life Federation legislative director Maria Gallagher told LifeNews. “The PA House passed the bill earlier this year. Governor Tom Corbett is expected to sign the bill into law soon.”
“The Affordable Care Act, also known as the federal health care law, contains a provision which allows states to opt out of abortion funding in the new health insurance exchanges operating in their state as a result of “health care reform.” Twenty-one states have already passed legislation to opt out of this abortion funding,” she said.

Comment:  Didn't Obama promise Stupak that there wouldn't be any abortion funding in Obamacare? 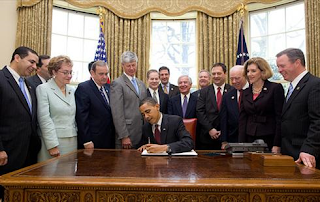 UN troops training in US to combat "terrorist suppression"