Vatican 2 Church as community failed in US public square 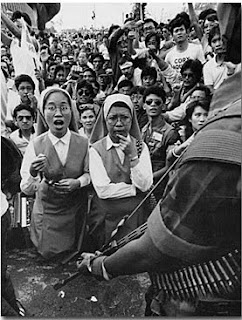 Vatican II made Catholics realize that they are the people of God, a community of faith.  This people aspect emphasized human rights,  justice and peace.  This is exemplified in the photo that shows how the Church has stepped up to block tanks and troops and avert a civil war in the Philippines back in the 70s.
Today, there is still an assault to justice and peace as the human rights of unborn children keep getting violated every day.  More than 60 million have been slaughtered in the US alone.  But where is the Church?
During the past elections, the Church left it to the conscience of the individual to decide whether to vote for pro-aborts of not.  What happened to the community;  why is now up to individuals?  And what about standing up for the rights of people - even if they are in the womb?
But it is as if Vatican II never happened as the Church failed to stand as a people to defend justice and peace.  It failed because of unfaithful bishops, priests and nuns who supported Obama and the Democrats  As a people, the Church has been dispersed by lies of fake Catholic groups and religious who blurred the Church's teachings as well as the candidates immoral stances.  The community of believers have been infiltrated, divided and mislead by other commmunity organizers.  The real community organizers of the Church were focused elsewhere.
Now the leaders of the Church are facing another opportunity to lead God's people in the public square as the November elections approach.  Will they rise to the challenge or will they succumb to the false prophets and dissidents that support abortion pols?
0 comments
Email ThisBlogThis!Share to TwitterShare to FacebookShare to Pinterest

There is hope for public education in the US as shown by the New Orleans experiment. It boils down to a somewhat privatization of the system that forces quality to thrive in a competitive system.

Video description:
Before hurricane Katrina ravaged the city in 2005, New Orleans had one of the worst performing public school districts in the nation. Katrina forced nearly a million people to leave their homes and caused almost $100 billion in damages. To an already failing public school system, the storm seemed to provide the final deathblow. But then something amazing happened. In the wake of Katrina, education reformers decided to seize the opportunity and start fresh with a system based on choice.

Today, New Orleans has the most market-based school system in the US. Sixty percent of New Orleans students currently attend charter schools, test scores are up, and talented and passionate educators from around the country are flocking to New Orleans to be a part of the education revolution. It's too early to tell if the New Orleans experiment in school choice will succeed over the long term, but for the first time in decades people are optimistic about the future of New Orleans schools.